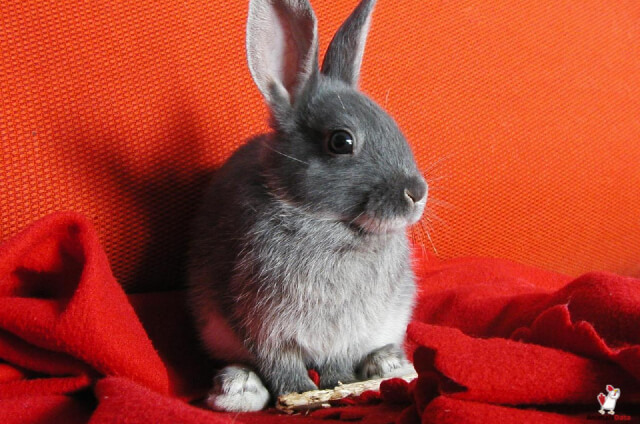 As one of the cleanest animals, rabbits do not give any smell. Or maybe, the smells they offer are not noticeable. Since rabbits do not sweat, do not expect to deal with sweat-related odors. However, be prepared to smell urine and fecal matter because rabbits are not exceptional – they pee and poop, just like all the other animals.

But there’s an exception, and it draws us to the idea of an unfixed male rabbit. If the buck (male rabbit) has not been neutered, it will exude a poignant musk. The bunny usually produces the smell to attract does (female rabbits) when it becomes sexually mature.

If you’re a new rabbit owner, do not expect your rabbit’s poop to smell like flowers and cupcakes. On the other side, the smell shouldn’t be too strong. The fecal matter is usually in pellets that bear a brown color. If you pick out a strong odor from the rabbit’s litter box, you could be looking at a GI problem.

A scent change could imply that the rabbit is dealing with internal parasites like worms. Also, it could mean that the bunny is not getting the nutrients it needs, especially fiber. Such fecal-matter changes should be treated seriously because a GI issue can be fatal. The vet should be the person you call first once you notice an abnormal occurrence.

If you’re dealing with poop that smells too bad you feel nauseated, change the bunny’s diet. If you’ve been feeding too many treats, fruits (like oranges and pistachios), and veggies, switch to a 100% fiber diet. Or 90% – the point is that fiber should account for most of the rabbit’s diet. Read here to know more about a rabbit’s dietary needs.

Because of its ammonia content, urine can be annoyingly smelly. Your rabbit produces high-ammonia urine, meaning that it could bear a sharply poignant smell that will pierce your ears. The urine that a male rabbit makes will be more intense than that of a female, so have that in mind if you’re buying a rabbit.

The cider will balance the rabbit’s pH, meaning that the urine produced with not be too strong.

Most of the rabbit’s smell will come from the litter box, home to all the pee and all the poop. This calls for proper litter box management, meaning that you need to make a couple of moves so that things change. Check the following list of steps:

This is quite an apparent thing to do, but most people ignore it. For every two or three days that pass, take out the litter box and wash it clean. Once you let the smell build up in the box, you will make smelliness its characteristic.

After washing the litter box, you may want to get some baking soda. This will help to reduce the smell even when you return the rabbit to doing its business.

Some woods are pretty toxic, so you should avoid having them in the litter box. When you start looking for materials to cushion the rabbit while peeing or pooping, choose something from this list – something that is neither toxic nor dangerous.

4. Empty The Box Outside

While the litter box is the heart of all the worst rabbit smells, the cage (or enclosure) is also a place of focus. As you clean the litter box, you should also do the same for the cage. This will ensure that there is no buildup of smells. In turn, your home will stop smelling like a rabbit nursery.

What about outdoor hutches? When our rabbits spend most of their time outside, it is hard for us to notice any smells. But one time, as you visit the hutch, you will pick out an annoying scent. This implies that you should clean the outdoor hutch as regularly as you clean the indoor one.

Remember that a dirty environment increases the rabbit’s chances of becoming infected with parasites like fleas and worms.

Why Is Hay So Important?

Hay’s odor is natural and fresh. If not, it is nowhere near pungency. So, it would help if you had fresh blades of grass in the cage every day to ensure that the enclosure does not smell bad. Hay is cheap, with one bale going for around $20. You can pick anything between oat hay and timothy hay, but ensure that it does not have any mold or mushrooms growing on it.

What About My Rabbit’s Toys? What Should I Do with Them?

Your rabbit’s toys spend most of their time in the cage. This means that they can pick smells, meaning that you should do something about them. When the toys get soiled, you may need to replace or clean them. A renewed toy will look more appealing to the rabbit, and play will be activated.

Should I Use Air Fresheners, You Know, Gels And Sprays?

Many air fresheners dominate the fragrance market, and you will be spoilt for choice once you walk down that aisle. To make it easy for yourself, ensure that you pick a product meant for pets.

Whether a gel or a spray, you can get a plug-in product or a manual one. If you get an electric plug-in spray or gel, the diffusion will happen slowly, meaning that the aura will remain fresher for longer.

1. A rabbit does not give off any smell, mainly because it doesn’t sweat. However, an unneutered buck will smell muskily to attract a sexually mature does.

2. On a scent scale of 1 to 10, the smell of your rabbit’s poop should be a number 4 – it shouldn’t smell that bad. When you suddenly pick out a number 7 going to 9, something’s not okay. Quickly, clean the litter box and cage, and do it regularly.

3. A number 10 smell means that the rabbit is experiencing some GI issues resulting from a bad diet. So, make the necessary adjustments and feed the rabbit only what it needs.

4. If you’re looking at getting a male rabbit (of whichever breed), be ready for a plus on the smelliness.

5. Use apple cider vinegar on the rabbit’s water to mitigate the ‘smelly’ effects.

6. Baking soda should do the trick if you’re looking at minimizing the pee or poop smells.

7. When hay is in plenty, the rabbit’s cage will smell fresh.

Well, there you have it! Rabbits do smell, but the situation can never be too overbearing. Leave a comment and tell us any other methods one can use to deal with rabbit smells.

Since you loved the read, you will surely love these:

2. Weeping Eyes in Rabbits (What to Do)

3. Are Rabbits Hard to Take Care of?