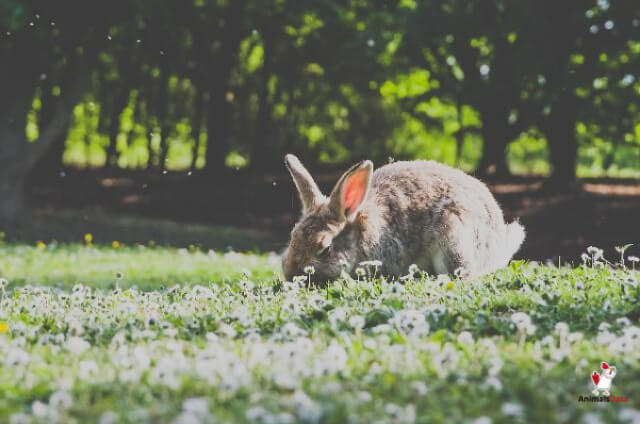 While rabbits may not be identified as vegetarians first-hand, they are herbivores. We know that a vegetarian does not eat meat, but some rabbit species are seen eating meat, which is in the form of the placenta. So, rabbits are not vegetarians. They are, for the most part, obligate herbivores.

A doe (a female rabbit) will eat her kits if she is stressed due to this or that reason. On the other hand, a buck (a male rabbit) will execute and eat up his young one. This all happens out of the sight of the rabbit owner, and possibly at night. When bucks eat their young, they usually do it to give the doe a break from mothering so that they can rebreed. It is recommended that a mother be kept away from the buck to take care of the litter peacefully.

If you talk a relaxed walk across the countryside, you will find rabbits chewing on blades of hay. When you take the discussion to a farmer, they will tell you that rabbits only eat leafy greens. In the end, it will appear to you that bunnies are suckers for greens and vegetables in general.

If you pay attention to the digestive system of rabbits, you will find out that their stomachs are not equipped to break down the meat. So, if rabbits eat meat, they are likely to develop some form of sickness. Their tracts are designed in a herbivore style – they process minimal proteins but high amounts of fiber. Rabbits get proteins from pellets and fiber from hay.

Wild rabbits are strictly vegan. Do not confuse hares and rabbits. Some hares engage in scavenging as a survival method, and rabbits are only a different and particular type of hare.

This guide is going to explore the subject of rabbits and what they eat. If you are a rabbit owner, you will get tips on meeting your pet’s dietary requirements.

What Wild And Stray Rabbits Eats

The rabbits that live and move in the wild are obligate herbivores. For survival, they depend on a steady and consistent supply of leafy greens. Because the greenness in the wild is so random, the common delicacy for most or all wild rabbits is grass.

If you’re strolling and find a rabbit burrow or warren, that area is likely to be full of dense greenness. This is not coincidental. Since rabbits need a steady and substantial amount of grass to survive, they will nest and rest in burrows near a food source.

If wild rabbits find fresh vegetables, fruits, and flowers, they will tuck into them. While this may be irritating to farmers, the bunnies should be understood – they are just trying to survive. So, wild or stray rabbits are not malicious; they only disrupt the calm of a farm so that they can stay alive.

When wintertime comes, wild rabbits are forced to shift their dietary needs. The snow and the general winter climate does not favor the growth of leafy greens. Since that is the case, you will find rabbits gnawing on tree branches and twigs. Also, they try to find their way up trees to access food there.

When a rabbit is brought into a human home, their diet does not change very much. The call to action for rabbit owners is that they should replace the grass. This is because it is almost impossible for a petted rabbit to eat as much grass as it would if it were operating on the laws of the jungle. In that case, the diet of a pet rabbit is divided into three portions. They are explained in the following table:

Pellets And Feeding Them To Rabbits

These food items have many plus points. Rabbit pellets provide bunnies with the needed calcium and protein. When taken, they help, especially baby bunnies, to grow their bones. The number of rabbit pellets should be unlimited until the rabbit gets to six months of age.

The supply of pellets should be cut off since they do not offer the most crucial dietary element: fiber. If a rabbit is given enough fiber in the form of hay, they will maintain good colon health.

But hay should not be served in isolation. It should be provided together with the pellets. And also, pellets should never be the only nutritional source for a rabbit. Since they form a small portion of an adult rabbit’s diet, give them a quarter cup per 6 pounds of their body weight.

With pellets, rabbit owners should ensure that they are fresh. If they are not well stored, rabbit pellets are likely to develop mold. Remember that mold can lead to a rabbit fatality.

If you choose to supply your rabbit with pellets, buy them in small portions to avoid them going bad. While you may need to replenish the supply often, the smaller bags will run out without getting spoiled.

Fresh Hay And Feeding It To Rabbits

Unlike the pellets, a bunny can never have too much fresh hay. This is the grass they eat when they are in the wild. A pet rabbit will remain undisturbed while they eat hay all day.

If you’re purchasing hay, get the best of it. Also, ensure that you change it every day since fresh things are the best. When hay overstays in the rabbit’s presence, it is likely to become moldy and, therefore, toxic. The best hay options are oat, meadow, or timothy hay.

If you’re feeding pellets to your bunnies, avoid alfalfa hay as it is found in the same pellets. So, too much alfalfa hay will mean that the rabbit is taking in excess calcium. Consequently, high levels of calcium will cause an array of health issues.

Remember that hay is a must-have for all rabbits, and they can never have too much of it. You shouldn’t be afraid of weight gaining – hay does not cause obesity in bunnies.

Fresh Vegetable, Fruits And Feeding Them To Rabbits

It will be surprising for you when you find out which veggies are fit for rabbits. For example, let us look at carrots. While people may think that they are the best snacks, they aren’t. They have too much sugar that could invite diabetes. Another example is lettuce – many types of this vegetable have lactucarium, which is a calcium-rich fluid. The best veggies you can provide for your rabbit include zucchini, broccoli, parsley, and bell peppers.

If you’re giving new veggies to bunnies, be advised to start small. You should monitor the bunny to see if they will react vigorously to the veggies. Once you settle upon the fruits and veggies of choice, stick to the appropriate portions. When fresh fruits and vegetables are concerned, when you give less is when you give more.

Rabbits And Being Carnivorous. Can They?

As you may have figured, the favorite foods of rabbits are vegetarian options. This reiterates the fact that pet bunnies are obligate herbivores. As mentioned elsewhere, domesticated rabbits are incapable of breaking down meat, and their need is for lots of fiber. Also, they need limited injections of protein.

If rabbits get overwhelmed by their curiosity and decide to nibble on some piece of meat, nothing terrible will happen to them. But, the meat may never make it to the swallowing part. They will love the gnawing – as they always do – but will ultimately reject the taste of the meat. So, as much as they would want to be carnivorous, they can’t. If they get to swallow the meat, it will not be processed, therefore causing a blockage, which is not good news – at all, at all.

Rabbits do not know what is right for them and what is not. Although instincts govern them, you will find bunnies making the most questionable decisions.

For example, your bunny may be asking for meat. They may be doing this merely out of curiosity, and because your dinner is probably smelling well. In the end, they will not even like meat.

Are There Any Wild Carnivorous Rabbits?

Throughout the article, it has been established that pet rabbits are not meat-eaters. So, what about the wild ones? Sometimes, animals that stay untamed go out of their way to remain alive.

But that isn’t applicable for rabbits. However, it does to some particular hare breeds. Hares and rabbits are closely related but different animals. However close their relation, they belong to separate species.

Let us pay attention to the Snowshoe hares. These are an excellent example of carnivorous lagomorph. While their primary diet is made of plants, they can eat animals when the need arises. They live in cold climates where, for the most part, there is no greenness. So, being carnivorous is an adaptation to guarantee survival. The journal named the Northwestern Naturalist promptly advances the discussion. During winter, the Snowshoe hare has been observed feasting on animal carcasses of small creatures such as birds. These types of hares are not fussy, though. They will eat the dead body of a bobcat, who is their primary predator. If worse gets to worst, they are likely to eat fellow hares.

This seems to be an adaptation of this particular breed of the hare. The protein they get from eating meat is what keeps them alive when the winter is too harsh. Let it be known that they are not active hunters – Snowshoe hares are merely scavengers. Remember, they don’t have razor-sharp teeth to rip meat off its bones. They find the ripping already done, and what they do is eat on the remains.

So, Are There Cannibals In The Shape Of Rabbits?

As captured previously, Snowshoe hares will not hesitate to eat one of their own if they have a burning desire. But, they will not engage in any hunting and killing.

Since pet rabbits do not eat meat, you will indeed not find them eating their own. You may find pet rabbits fighting for dominance and territory, and both will involve biting and not flesh-eating.

In all these cannibalistic discussions, there is an exception. As mentioned in the first words, some bucks and does eat their kits. Here are the reasons for you to understand the said behavior:

1. Confusion – sometimes, a doe may eat her first litter. When she gobbles them down, she may be thinking that the kits are the afterbirth items, which she would otherwise eat naturally.

2. Stillbirths – if the doe realizes that the baby born is still, she will go ahead and eat it. Reliable sources say that she is ‘correcting the error’ by removing the evidence.

3. Nutrient deficiency – at the time of birth and lactation, the rabbit may feel the need to get a particular nutrient. To deal with this urge, she will eat her young one. However, that is rare.

4. Sudden fright – When the rabbit feels scared, she will eat her kits and then bolt. This is to remove any traces of her presence in the burrow.

Although there are reasons for rabbits to eat their kits, it rarely happens, and when it does, the underlying thing is the rabbit’s survival instincts. If you have a doe pet that has eaten her young ones before, think hard before engaging her in another breeding. Please find out the reason and take care of it before thinking of making another litter.