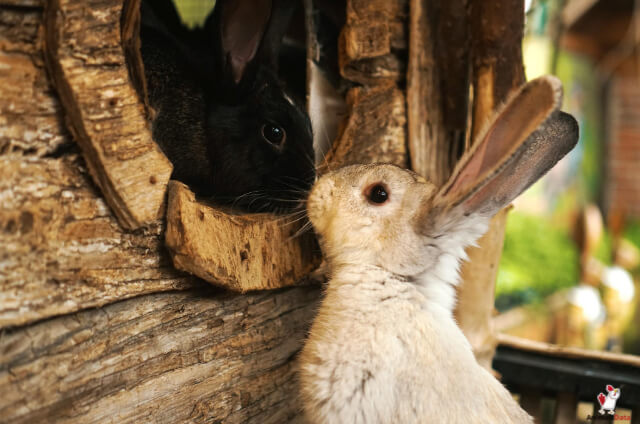 Well, yes – female rabbits do hump on each other. This assertion is based on the findings recorded on the IJZ (Italian Journal of Zoology), where two female rabbits humped each other in an already-hierarchized colony. The motivation behind the girl-on-girl humping was showing who is more dominant without the scratching and the slapping.

Some female rabbits hump male bunnies. In such cases, the female identifies as the top dog in the colony.

This section is all about mounting and humping in rabbits – all the details, juicy and juiceless, that you should know. If you want to stop them from humping each other, well, there’s that too – all in this read. Go ahead; it should be a good one!

When a rabbit humps another persistently, it could either be for reproduction or assertion. Whether a rabbit is neutered or not, it will try doing stuff to another rabbit, some of which the other rabbit won’t like. This means that at one point in The Hunger Games, you may need to intervene. Or not you – anyone who doesn’t like seeing the mounting and humping going down.

Assertion via humping is a rabbit phenomenon where one bunny goes over the other to communicate that it’s the boss. Since rabbits are social, they love interacting, and in the mingling, they forge a top-down relationship. The more dominant rabbits will mount the ones in lower ranks, meaning that they get more space and better social structure recognition.

But mounting should be taken normally. It is a natural inclination of the rabbit, and a humper should only be stopped if things are getting ugly. If you see the mounted rabbit kicking, fleeing, making sounds, and biting, you should know that the mounter is not welcome. These two rabbits should therefore be kept away from each other before things turn bloody.

Rabbits And Humping: The Intrinsic Meaning

Humping is a breeding attempt that may not be affected by the neuter/spay surgeries that vets do. A rabbit will also hump on another to show its interest, meaning that it can be interpreted as flirtatious behavior.

When a rabbit mounts for social structure reinforcement, it comes against a background of other complex behaviors. We could say that when a dominant rabbit feels like their position in the structure is threatened, they mount on the threat. This happens mostly between two rabbits that are meeting each other for the first time.

Rabbit Humping 101: When The Rabbits Start To Bite

Because some humping acts are violent, rabbits often leave the scene with bites. These bites are nothing more than little nips or pinches. And actually, the nips bear more than the pain; they are means of communicating. The rabbit that nips the other is the alpha, and we can say that the biting is secondary to the humping, but they all function the same.

When the mounted rabbit also wants a decent place in the hierarchy, it will bite. When it happens, it is not a mere bite – it may become harsh to the extent that some fur is pulled out. That kind of move triggers a fight between the two rabbits.

Flip Question – Do Male Rabbits Mount Each Other?

Well, if females hump, why wouldn’t males do it too? A male rabbit will hump on another for the same reason: the assertion of dominance. It is an excellent guess when you say that male humping sessions are more likely to get violent than females.

Backward Humping: What Exactly Is It?

When the typical ‘front’ humping involves a rabbit climbing behind another and over its back. With backward mounting, the mounter will hump from the front, which is both awkward and funny. But basically, it serves the same functions as the other type.

Some sources will tell rabbit owners to stop their rabbits when they see backward mounting going on. This is worth considering since the mounter exposes its genitals and underbelly, making it vulnerable to an attack by the mounted. To avoid any severe injuries, guide the rabbits not to backward-mount each other.

Some suggestions point out that a rabbit may be reverse-mounting another to communicate some issues like play, bonding, and social position. Oddly, other things that the mounter may be telling the mounted rabbit a physical I-love-you.

What about mental illness? What if the rabbit unnaturally mounting the other is a little loco? That’s a reasonable hypothesis, don’t you think?

As a surgical procedure, fixing (neutering or spaying) lowers the sexuality of the rabbit. It makes the doe less of a female rabbit and the buck less of a male. Some of the destructive and unwanted behaviors that neutering stops include digging rabbit holes, chewing, spraying urine, and aggression.

We should not take mounting itself as a destructive act. As we have already seen, it helps in communication. So, although a rabbit will be spayed or neutered, it will hump on occasion.

The only thing you might want to worry about is when the mounted rabbit feels annoyed because things can escalate quickly.

And neutering won’t take care of the female or male rabbit humping completely. The surgical procedures do not usually rid the rabbit of all hormones, so some spikes will occur.

Final Words: To Stop Or Not To Stop Them Bunnies From Mounting?

Before you even think about intervening in natural business, you need to know the situation. First, identify if the humping is normal or in excess. Since hierarchy is essential (more like human law and order), stopping a normal mount could mean disrupting a social structure.

The only time you should stop a mounting is when you see it ending up with one rabbit at the vet’s clinic.

When you’re bringing in a new rabbit into a bunny-crowded space, the mounting behavior could go up. The alpha rabbit, who has already mounted the others, will have a renewed appetite. It will look for the newbie for weeks and push its dominance until the rabbit is a part of the colony.

If two rabbits don’t agree on who will be the alpha, the humping will become a big problem. Both rabbits will injure and pull each other’s fur. The one ‘red’ sign you should be looking forward to is when a mounter rabbit fails to hump the mounted, and then the latter escapes. The chase can be intense, and things will often end in a bad-bad brawl.

As a rabbit owner, you should intervene whenever the first act of aggression gets displayed. Do not go on the offense and punish both rabbits; pull them aside and wait for them to calm down. Once they relax, cuddle them and give them equal warmth. If you pinch or nudge them with sticks, they will end up having a common enemy: you. And are rabbits harmful to humans? Well, I guess you better find out.

Give the rabbits room to warm up to each other. Since keeping them in one cage is a no-no, consider keeping them in different spaces. They shouldn’t be able to see each other, but their scents should be syncing.

And lastly, reproduction. Bunnies will hump each other because it is rabbit mating season, and they want to breed. If you allow your intact doe and buck to proceed, you will be looking at some kits after your rabbits have babies.

Now, before you leave your comment, have you ever wondered if a rabbit would hump on another animal, say, a cat? Well, if you want to know about it, read here.