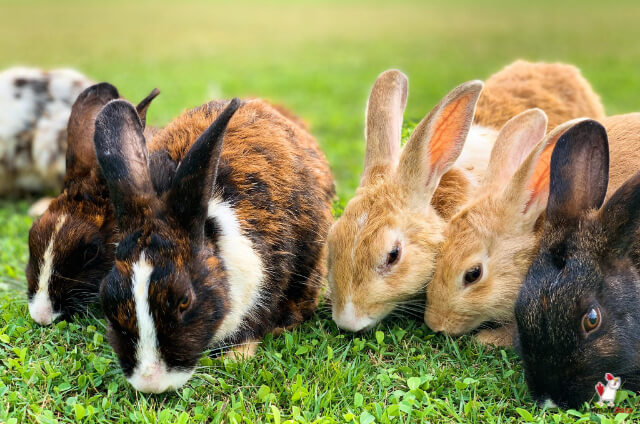 The American Rabbit Breeders Association, which is abbreviated as the ARBA, recognizes around 47 different breeds of rabbits. If you want to choose the right breed for yourself, you need to consider the place you live in, the time you have for pet parenting, and the different people who will handle the rabbit. If you are the busiest man or woman on the planet, it wouldn’t be wise to get a rabbit that needs its owner to brush it daily.

Here Is A Tabulated List Of The Different Rabbit Breeds:

The Best Breeds Of Rabbits

Rabbits are intelligent and beautiful animals, and other sources record over 60 breeds that are in existence. So, we understand that it would be essential for you to narrow down to the one you want. For example, if you are looking to own a lop-eared, snuggly, and giant rabbit, you need to know the differences that arise between the various rabbit breeds that are lop-eared, such as the English Lop and the French Lop.

After all, each breed is different in terms of size, basic requirements, and innate personalities. You may not be drawn to rabbit breeds that have lop ears, but then, you could be looking for a giant breed. This means that a Flemish Giant is more fitting for your specific taste. In that case, therefore, this article is out to sort you out.

In the following pages, parts, and portions of this article, you will get full explanations of some of the distinguishing traits among most rabbit breeds. Furthermore, you will get loads of info regarding learning the show-quality traits in each of the rabbit breeds. We will go over all the tips that regard the pets that you can gift to small children, like the Holland Lop. Also, we will look at others that need a large amount of space, like the Continental Giant, the ones that are shy and timid like the Netherland Dwarf and the Polish rabbit, and the ones that need more grooming, such as a Lionhead rabbit.

If you’re looking for a rabbit that will impress your eye through the patterns of its fur, you would consider getting a Dutch Rabbit. If you need a rabbit whose fur feels soft and velvety, you can get a Mini Rex to keep on stroking. Here’s a list of the top best rabbit pet breeds. We hope you enjoy the compilation.

As an increasingly famous breed of rabbits, the Lionhead Rabbit is identified by a unique and outstanding fur mane wrapped around its neck. The mane looks like that of a lion hence the name. The mane forms part of the cuteness of this breed, which is found in a wide color range weighing about 3 pounds. Their looks put them out as great show animals, and they are great pets because of their personalities.

If you are looking for a really calm rabbit breed that looks largely intimidating but isn’t, the Flemish giant is the one for you. It is one of the oldest and largest breeds. They are easy-going and have laid-back personalities that make them one of the best pet breeds. Their giant sizes complement their 16-pound weight. The Fleming giant breed is available in many standard colors.

This breed includes rabbits that have a stocky, almost-boxy, and short body type. They actually resemble bulldogs. Their ears are lopped and short, and the tuft of hair resting on the top of their heads is quite pronounced. The average weight of rabbits of the Holland Lop breed is in the region of 3½ pounds. They exist in different colors and have personality details that make them good pets and show rabbits.

Depending on the country of the rabbit’s origin, each Continental Giant varies in a body-style and specific type. They are probably the largest existing bred and will weigh between 18 and 22 pounds. They have large, erect ears, and they are available in various, different colors. However, the standard has a base of around eight colors. Continental Giants thrive best when they interact a lot with humans and are exceptionally intelligent. Since that is the case, this breed is highly desired for petting. In show circuits, the popularity of the Continental Giant is growing immensely.

As its name suggests, the breed includes rabbits that are small. However, their smallness is not parallel to their awfully high energy levels. With the high energy levels comes a lot of issues with overt aggression. If you want to choose a Netherland Dwarf for show purposes or petting, rabbit breeding experts suggest that you choose wisely. This applies especially if the rabbit is intended to be parented by a child.

This breed of rabbits can be identified by their combined colors – a base-color and some strokes or patches of white. Approximately rabbits of this breed weigh around 4 pounds and have compactly short bodies. Also, they have ears that are short and erect. Generally speaking, the Dutch Rabbit consists of docile animals. If you are looking for a pet, this could be the right choice. They are a common breed that appears a lot in show arenas.

The English Lop is one of the largest rabbit breeds. It is instantly noticed by its lopped ears that are excessively long. The ears have an average length of between 21 and 32 inches, that is, from tip to tip. The bunnies of this breed are easy-natured, calm, and weigh around 12 pounds. You will find them in multiple colors. Most English Lop owners choose to show them off. However, they are good choices for pets.

This breed consists of commercial, medium-sized rabbits with high pricing because of their intelligent, calm, and sweet characteristics. Apart from having lopped ears, their heads are in a boxy-style. Their name is often shortened to Frenchie, and they weigh at least 14 pounds. There are not many colors to choose from when it comes to this breed. They are excellent pet choices, and they also perform well in shows.

This breed consists of rabbits that are compact and small. The distinguishing characteristic is their soft fur, which has a velvety texture. Most of the Mini Rexes are good-natured and calm, although sometimes they change. So, it would be a good thing if you took a lot of caution when you decide to take this one up as a child’s pet. They are easy to house since they don’t take too much space – their weight is in the region of 4.5 pounds.

The rabbits of this breed are known for their miniature size and weight of between 2 and 3 pounds. If you have limited petting space, these would be good pets to take up. They have taken up the name Aristocrats of the Rabbit World, and you will find them in around seven base colors. The bunnies usually have a friendly and peaceful disposition, making them a favored breed among children to have as pets and for showing.

The Rarest Breeds Of Rabbits

Many people associated with the world of rabbits have heard about Rex and Lionheads, but there are a couple of breeds that not many people know exist. Many breeds are endangered and rare and don’t appear in the limelight a lot. If you are passionate about bunnies, you must know all the breeds that are out there.

From this point onwards, you will be introduced to rare breeds of rabbits. Each of them has its distinctive qualities, and a couple of them make great pets. The list follows no particular order, but it full of greenness. Carry on:

When it first came to the limelight, the name of this breed was German Blue Vienna. After the First World War, which Germany was mostly blamed for, the breed’s name changed to the American Blue Rabbit. The rabbits of this breed are unique to North America, becoming the rarest in the United States. A Californian man bred the American Blue Rabbit by bringing together the Blue Viennas, the Blue Beveren, the Blue Imperials, and the Blue Flemish Giants. They are mainly bred for fur and meat, though that does not stop many breeders from making them show rabbits. They are a hardy and docile breed, meaning that they can be excellent pets. Some of them have red eyes, and color variations range from albino to deep blue.

This breed was developed in the 1920s in  Switzerland. It was a product of the crossing between Havanas and Angoras. The breeders were attempting to replicate that fur of a fox, but the resultant animals were of a completely different breed. At the moment, the Swiss Fox is used for showing in its country of origin. Actually, it is even rare in Europe. The rabbit is medium-sized and has a fluffy coat that comes in shades of white, Havana, blue, and black. Since they are a friendly breed, the Swiss Fox rabbits are great pets. However, because of their coats, they are more demanding and need more care.

This rare breed of rabbits have black rings around their dark and beautiful eyes. They have bright white fur, and they came from France. In the 1920s, the breed was famous throughout the United States and Europe. After the Second World War, the popularity of this breed started to go down. They are one of the endangered rabbits because of their small population all over the world.  Usually, the Blanc de Hotot is bred for its fur, meat, and shows. It is also an excellent family pet. This breed of rabbits prefers to be active, is lovely, and very friendly.

This rabbit breed, like the Blanc de Hotot, is considered one of the most endangered mammals worldwide. Actually, it is an indigenous rabbit near the African place known as the Karoo. They are mostly burrowers, and they live along seasonal rivers within the riverine bush. In 1902, they were discovered. It has been noted that the main threat to their survival is domestic dog predation, habitat destruction, getting run over by motor vehicles, and lack of expert knowledge on the species.

The Endangered Wildlife Trust has developed a program to ensure that these rabbits survive. If you live near the habitat of a Riverine Rabbit, you are unlikely to see them since they are both solitary and nocturnal.

This name can be misleading because it is not a breed of hares. It is a hare-like breed of rabbits. The Belgian Hare Rabbits have strong and long legs, and their bodies are muscular with an arched back. As their name suggests, the rabbit has its origin in the Kingdom of Belgium. Around 1865, the breed was imported to England.

The breed consists of nervous rabbits that are best suited for showing. Compared to other breeds, they can thrive and survive out in the world. When unfamiliar and loud sounds meet the ears of the Belgian Hare Rabbit, the animal is likely to become anxious and jump high into the air. This implies that they will not do well if they are caged. As listed by the ALBC, or the American Livestock Breeds Conservancy, the Belgian Hare Rabbit is among the many threatened and endangered species.