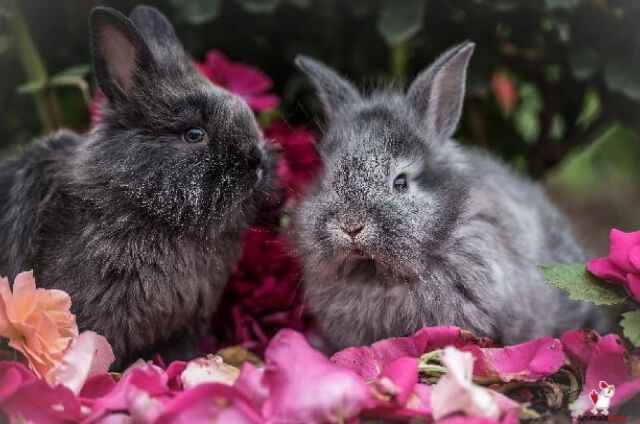 I believe the question here is this, ‘What is the specific mating season, and when does it run?’ Well, rabbits can mate all day, every day. There is a funny saying that goes like this: BREED LIKE RABBITS, and it is entirely accurate. When a rabbit is pregnant and delivers her litter, it can get pregnant moments later, that is, if there is an active male around.

The only time a rabbit cannot mate is when she is pregnant, usually around 32 days. Unlike other animals, rabbits do not have seasons of ‘heat.’ Rabbits do not experience estrus – their eggs are not released on schedule. For the ovulation of a doe (a female rabbit) to occur, she first must get mounted by a buck. Rabbits are fascinating beings.

In the wilderness, it is no hidden secret that rabbits reproduce frequently. Lagomorphs have an innate desire to keep their species very alive. These instincts bore by the wild one carry over to pet rabbits. When the instincts start to act up, your pet rabbit will be ready, keen, and willing to mate.

As mentioned in the starter, rabbits do not go into the typical ‘heat’ period. Whenever rabbits become sexually mature, they are ready to mate. At around three months of age, most does enter their sexual episodes of life. They become more active sexually than ever before. Then, they start to breed – something that happens at any time. However, it has been noted that rabbits breed more between March and September.

Since rabbit breeding is sometimes beyond the control of breeders and pet parents, it needs to be checked. Rabbit experts recommend that female rabbits be subjected to spaying for health or comfort. Unless you are a breeder or regularly breed rabbits, there is no reason to let your doe endure sexual heat all the time. Control is not limited to the female rabbits only – it also applies to bucks. Although the males do not get into sexual cycles of heat, they have an innate drive that pushes them to want a mate. When the male is neutered, their desire to mate gets eradicated. Since neutering suppresses testosterone, the male will be very calm.

After they are born, rabbits reach and achieve sexual maturity quickly. As a rule, a doe becomes sexually mature when she celebrates her three-month-old birthday. The process and development rarely go beyond six months.

On the flip side, males mature faster. At two months, a buck can get a doe pregnant. Since male rabbits are compelled to act on their reproductive urges, neutering should be considered early on. If two rabbit siblings, who are born of the same litter but being of different sexes, live in the same cage, the chances are that mating will happen. So, the idea of families, which is a human construct, does not govern rabbits’ behaviors.

The idea of siblings brings about another concern – parents and mating with their rabbit babies. So, it would be a brilliant idea if you kept a keen eye on rabbits that live with their parents. Bucks will even try to mate with their mothers and does with their fathers. Congenital disabilities for ‘incest’ babies are not a thing, but the pregnancy will surely be unwanted.

How Do I Know When My Female Rabbit Is In ‘Heat’?

If your doe is experiencing a heated period of life, she will go through some personal and physical changes. While some of them will be easy to note, others won’t. You need to know the signs. The following  is a tabulation of the signs together with brief but essential explanations:

If you get your female rabbit spayed before she even achieves sexual maturity, she will not experience any of the symptoms captured in the table. But the logistics of that happening are dependent on whether your rabbit gets to the ages of maturity.

If you don’t want your female rabbit to become expressive with her newfound maturity, you need to complete the spaying procedure as soon as you can.

Male Rabbits And Heat Cycles – Do They Have Them?

In the traditional sense, male rabbits, or bucks, lack a heat cycle. You will not hear of a buck entering ovulation as a doe does (as this would be hard to believe). But, males have a compulsion that drives them into mating all around the clock. Whenever a buck achieves sexual maturity, his copulation urges spike. For this reason, it is good to consider neutering as it is a beneficial procedure. As compared to spaying (for the does), neutering is more critical. A male rabbit that is not fixed will become destructive very quickly as a result of sheer frustration.

Try and see things from the buck’s perspective, and you will understand the need for the surgery. The male rabbit was born with only one job – to breed and expand the population of his kind. While preventing the buck by doing something that is sheer cruelty, you need to think about the costs. The more rabbit litters you have, the more you will need to provide. It would be painful to give up the baby rabbits to an adoption home or watch them euthanized. Weight the costs and the benefits and make your decision.

We have established that males get frustrated when they achieve sexual maturity. Here are some of the signs that develop under the blanket of ‘frustration’:

1. He will engage in frequent humping and mounting.

2. He will keep scenting and marking his territory using urine, which will be smelling awful.

3. He will experience frequent mood swings. While he maintained long energy runs before the maturity came, he will go down on the playing. If he were calm and relaxed, he would start to bite you, you know, biting the very hand that feeds him.

4. He will start gnawing. Typically, rabbits chew on anything to ensure that their teeth remain neat. Well, a male rabbit that is sexually active and frustrated at the same time will overdo things. While it would be annoying to stop the rabbit from gnawing, ensure that he doesn’t chew on anything that can expose him to a health risk.

What Is The Length Of A Rabbit’s ‘Heated’ Period?

For around sixteen days, your female rabbit will remain in the heated period. Of these days, the doe will be fertile for about 14 of them. This implies that she will open up to mating, and she may or may not seek a partner actively.

As mentioned elsewhere in the article, rabbit reproduction is unique and not like that of other mammals. Ovulation does not happen before mating. Instead, mating is what triggers the ovulation process. If an intact male humps an intact female, the female will ovulate and release eggs that may be fertilized. Technically speaking, the heat cycles or rabbits do not end. Once a rabbit becomes sexually mature, they remain in a constant loop until they die or if they get spayed. There is nothing like menopause for rabbits.

The reason why it operates that way for female rabbits is instinct; rabbits have an innate construction that pushes them to sustain their species by procreation. This construction is made and motivated because rabbits are prey to many animals, and they know it. The idea of ‘safety in numbers’ is what guides this sexually active disposition of rabbits.

I Just Spayed My Bunny Doe. Will It Stop Her From Wanting To Mate?

Spaying has an overwhelming effect on the hormones of a rabbit. When the surgery gets done, the results start to kick in. When the female hormones are reduced, the rabbit will not be interested in any mating. She will be calm and very easy to manage. This also goes for the bucks. Neutering will reduce the frustration and aggression associated with unexplored sexual desires.

While neutering makes it seem like you are denying the rabbit a chance to feel life’s pleasures, you aren’t. In fact, you are merely assisting her to be a better pet. Actually, domesticated and tamed rabbits have no biological need to mate.

So, do not see your pet as the one responsible for maintaining the rabbit species. Studies and experts say that neutering and spaying are procedures that will improve the rabbit health. Specifically, the risk of a fixed rabbit getting cancer drops.

During Rabbit Heat, Do The Females Bleed?

Menstruation does not happen to rabbits as it does to humans. This implies that you will not see your doe bleeding after she achieves sexual maturity. If you see her genitalia looking bloody, something serious could be brewing.

The House Rabbit Society notes that the bleeding may not be something that could lead to a fatality. Actually, your pet could be reacting to something that they ate, which may have discolored its urine. If the bleeding is not together with the urine, reach out to a vet as soon as you can. No bunny should be bleeding freely. It could be that the pet got herself injured.

Is It Painful For Rabbits When They Achieve Sexual Maturity?

To say ‘painful’ would be making an overstatement. The better word is ‘uncomfortable.’ Like humans, secondary sexual changes are not easy to bear. For rabbits, the one urge that makes them restless is the sexual drive. So, she will try to seek a male so that she feels comfortable. If she doesn’t, you will have one restless doe. The same thing applies for a buck – even more significant. The impulse that comes down on the rabbit drives them away from calmness, and its tempers will spike.

As reiterated, you need to take the option of fixing the rabbit by neutering or spaying. With the surgery, you will make the rabbits tamer.

Can Female Pregnancy Happen Without Mating?

To get a female rabbit pregnant, an intact male has to mount and inseminate her. Like any other mammal, insemination is essential for the doe to conceive. And, it takes an intact male and an intact female to make a litter. What’s more, is that the insemination needs to happen via active mating. If you find traces of a buck’s semen in the hutch, those are not likely to cause the pregnancy to the doe. So, it is always good to clean the rabbit cage in the name of sanitation and proper hygiene.

Can A Pregnant Doe Experience A Desire For Mating?

When your doe is full of developing kits, she will not go for mating. During these ‘pregnant’ times, she will not be a subject of attraction to male rabbits. This will also happen if she is experiencing a pseudopregnancy.

Put aside the desire for mating. Your doe will be territorial and moody. Also, she will react angrily if you mess up the cage, especially when she is trying to build a nest.

As mention elsewhere in the article, a female rabbit will bounce back from the pregnancy hours within the delivery. With this information in mind, you should take care not to let the does get pregnant. Two consecutive pregnancies are sheer carelessness.