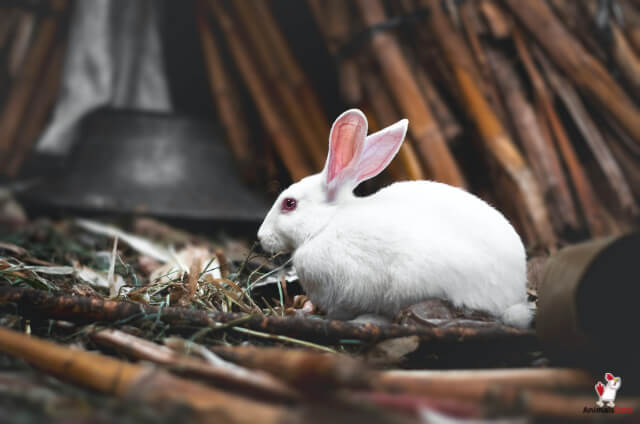 The meaning of the phrase ‘white rabbit‘ has been widely used, and it has an interesting meaning. Actually, the longer and complete phrase is ‘follow the white rabbit.’ This phrase has been used in a couple of movies, and the best one is arguably Alice in Wonderland. Following the white rabbit would lead to the rabbit hole, which opened up to a world of fantasy. Whenever someone says ‘follow the white rabbit,’ they say that you should explore new areas and take on beautiful adventures.

Many conspiracy theories are surrounding the phrase, but those will not be given attention in this article. This article will look at the spiritual value of the white rabbit as an animal. Also, it will look at rabbit symbolism – how the rabbit is viewed all around the world. Let’s dig in.

People have often gifted or been gifted white rabbits. One spiritual writer (Amanda Linette) notes that her parents got her a white rabbit when she was a little girl. Later in life, Amanda expresses her gratitude as she got a chance to take care of many other white rabbits. She joined animal clubs that took care of small animals. Also, Amanda met other humans that were sharing her spiritual sentiments. Now, she sees caring about rabbits as a spiritual thing. She is a spiritual pet caregiver.

In her article, Amanda notes that unlike humans, rabbits have shorter lifespans. However, bunnies move quickly, and we have a lot to learn from them. In spiritual fervor, she notes that rabbits can teach us many things about using our intuitive senses.

In general, rabbits are symbols of a release of fear. On top of that, they indicate that one is willing to trust their intuition. Whenever you see a white rabbit, it should register in your mind that purity is before you. White rabbits symbolize purification, and their appearance is an encouragement that the world is a curious and playful place that you should enjoy to the fullest.

As mentioned in the starting lines, the meaning of the white rabbit is akin to the message we get from Alice in Alice in Wonderland. In that movie, Alice chooses to follow a white rabbit. By making this move, she ultimately affects her happiness and survival on the earth. The white rabbit, therefore, is an image of exploration. Alice is usually unsure about her life, and the white rabbit comes to her rescue and provides an alternative path for her. So, the appearance of the white rabbit often means that we are entering a journey we have no idea about.

If you have this knowledge, you can take on any path that seems uncertain. When you follow the white rabbit, you will step into a world clouded with mystery but with a powerful ending. The following sections will explore other interpretations of the white rabbit. If you’re not a spiritual person, you will need to open up your heart and mind to take them in:

1. The Purification Of Fears And The Idea Of Letting Go

When a white rabbit appears, they communicate a message of letting go of anything that is weighing down on you, be it ideas or fear. It tries to tell you not to be very serious with life. Also, the pure rabbit shows you how reality is distorted and all the paradoxes of life. In essence, it tries to help you to be more aware of what you are going through.

Once you see a white rabbit, you need to allow yourself to enter a period of letting go. You need to grow out of your fears. When you get that done, you will end up with your true self.

An expert of spirituality who goes by the name Jamie Sams asks spiritual people to enter into a state of emotionality. This is where you start imagining emotions running and flowing throughout your body. These emotions, which are coming out of the vision of the white rabbit, are supposed to excite your body. Then, the feelings will get channeled back to the earth. Amanda notes that Jamie’s technique is beautiful since it shows the white rabbit’s value in terms of emotional release.

2. The Time To Live A More Fun And Exciting Life Has Come

The one great message from the white rabbit is that life can be fun no matter what. It doesn’t matter if there are many twists or if the path is dark – try and find something exciting in the mystery. The rabbit asks that you put a lot of trust in your intuition. It would also help if you got your cohorts and friends to guide you and make your life fun and more appealing.

If you see a bunny with a white coat, take a pause and ask yourself this question: hey bunny, what can I do to make my life more fun and feel more energetic today? Take on whatever comes to mind first since that way, you will be following in the path of the white rabbit.

3. The White Rabbit Can Refer To A Short Turn Around

Suppose you’re embarking on a journey – where a little or a big one – a white rabbit will guide you through it. The bunny will help you to traverse anything and beat the most challenging landscapes. When the rabbit appears, it shows that you are alert and evolving more than ever before.

The gestation time of a rabbit is around 28 days, meaning that rabbits deliver quick births. If you transfer this fact to the white rabbit symbolism, it means that the change you are going through now will only be short-lived.

Also, rabbits have many litters since they breed a lot. If you look at that detail, too, it could mean that what you are going through is likely to be expansive and rapid. For that reason, remember that you have a great spiritual companion. As it has already been established, white rabbits are signs that there will be quickness and purity with whatever you are going through. The white rabbit’s symbolism is that it calls you into a time of rapid and quick transformation.

Recap In A Tabled Style

This section has opened up the discussion on the different interpretations of the white rabbits. How about we do a little recap of what the white rabbit symbolizes in spiritual terms?

Rabbit Symbolism Around The World

In this section, we are stepping away from the white rabbit. We will now focus on the animal regardless of the coat color. We will focus on what the rabbit means in different societies – Native Americans, the Eastern Cultures, the Christian, and African societies. Read on and get your soul fascinated.

What The Rabbit Symbolizes Among Native Americans

On the other hand, the Aztec view the rabbit sign as pointing to an alcoholic beverage of sorts. Furthermore, they connect it with boozing and debauching. In many tribal legends, the rabbit deity and spirit animal are taken to be heroes. While it acts foolishly and tricks its rivals, most Native Americans have a deep respect for the rabbit spirit animal. This is because the rabbit is not an evil or a dangerous being. For many, it is both a friend and a spiritual guide.

In children’s stories, the rabbit is a well-known character. When it makes an appearance in a fable, it usually has an inflated ego and many tricks. The folklore of the Native Americans describes rabbits dying, killing, and reviving randomly. In some legend, the bunny alludes to the person of Jesus Christ, the son of God – the son of the Earthmaker, the creator god.

In tribes of Anishinaabe, the bunny spirit is put out as the Great Hare, or Nanabozho. The Great Hare is believed to be the Sun’s son. Also, he is viewed as a friend and teacher of humanity.

What The Rabbit Symbolizes Among Eastern Cultures

In Korean and Chinese folklore, there is a story told of the Jade Rabbit, who is the Moon Rabbit. The story comes from a Buddhist tale, which is very interesting. The Emperor of the Heavens called upon three animals –  the monkey, the fox, and the rabbit. He was disguised and pretending to be a beggar and asked the three animals to bring in food. The first animal, the fox, caught a fish and brought it to the beggar. The monkey, which was the second, provided the masquerading Emperor with fruits.

The rabbit, who was not as resourceful as the other animals, only had grass to bring. In a sacrificial spirit, the rabbit decides to burn himself in the grass, offering his life to the beggar. Coming out of his masquerading, the Emperor was impressed with the sacrificial spirit of the rabbit. He then decides to send him to be his guardian on the Moon.

So, what exactly do bunnies stand for in the Eastern Countries? Apart from being icons of religiousness, the rabbit spirit animals symbolize vigilance, cleverness, lechery, dexterity, fertility, wit, self-protection, and of course, the Moon. Among the Japanese, the rabbit symbol is printed and engraved in merchandise and kimonos.

For the people called the Han Ethnic, it is forbidden to eat rabbit meat. The belief behind this is quite hilarious for an outsider: pregnant women who eat rabbit meat will birth babies who have hare-like lips.

What The Rabbit Symbolizes Among Christians

Among Christians, the rabbit symbolism appears in the image of Easter and the Easter bunny. The Germanic deity names Eostre is the one from whom the word Easter came. The deity is a goddess of fertility and spring. She is associate with the hermaphrodite rabbit animal spirit.

The first western Christians had it in mind that rabbits were like the Virgin Mary, that they would get pregnant without any sexual engagement. Because of that connection, many books, manuscripts, and paintings have been created depicting them together.

But really, what exactly is the spiritual value of the rabbit in Christianity? Its presence in the Christian space is merely how German immigrants tried to include their children through narratives. Of the many stories, there is a tale that describes Jesus as having a pet rabbit. The rabbit is depicted as a patient animal that waits for its owner to come back after a revival (or the resurrection). In Christianity, the rabbit has now come to be the image of patience and hope.

Let’s take things to Easter. What exactly is the meaning of the rabbit spirit animal in the Easter sense? Actually, the tale is just brought from German folklore, that only the well-behaved and good children get decorated eggs as gifts.

What The Rabbit Symbolizes Among Africans

Some African myths believe that rabbits bear bad luck. When a rabbit crosses your path, you are likely to walk in a cloud of evil omen. Another negative portrayal of the rabbit is that it is seen as the Moon’s divine messenger. The Moon sends the rabbit to gift humans with immortality. Because the rabbit is a tricky animal, it decides to give humans death. It does the exact opposite. How cunning!

When the Moon hears about the rabbit’s mischievous doings, he decides to hit him with a stick. While the Moon inflicts his punishment, the lip of the rabbits gets split.

But it doesn’t mean that the rabbit has an entirely negative connotation among the African people. Some groups see the rabbit as an image of kindness and wisdom.