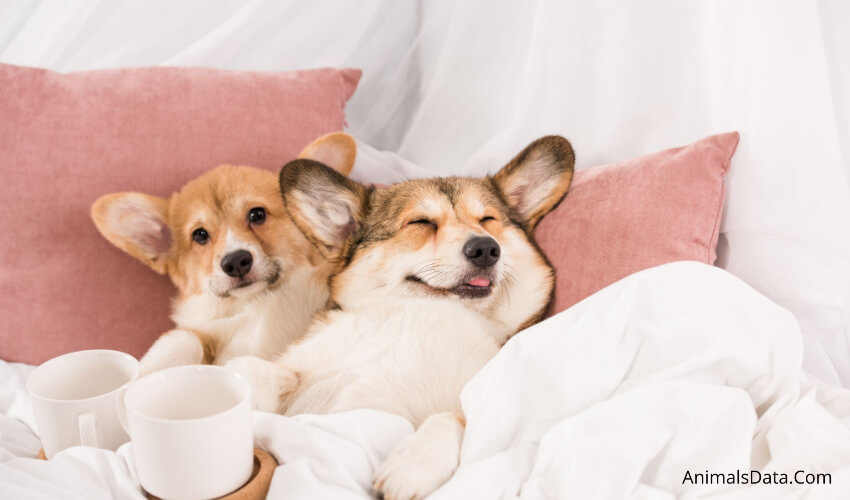 Expertly speaking, my answer to this question is yes. If the female allows, the dog can get it on with her for at least five times a day to a maximum of eight. If she doesn’t, well, the male will keep trying for about zero times.

However, the affirmative response above is a half-truth. Why? Well, there are a couple of ‘whether’ statements that come into play. They will help you to understand the mating behavior of your male dog.

Your male dog’s mating behavior will depend on:

1.Whether The Dog Is At Its Pre-Pubescent (Puppy) Or Pubescent Stage: As a young puppy, your dog will not give you a lot of trouble, but as soon as it hits five months, testosterone levels hit their first peak.

At that time, they begin to mount and thrust on anything and everything, even on you. At seven months to around a year, their inclinations towards mating grow. This pubescent stage comes with a higher sexual drive, upping their mating behavior.

2. Whether The Dog Gets Neutered, That Is, Castrated: When you get your dog fixed, its sexual energy will be limited, if not reduced. For most dogs, the procedure reduces roaming incidences, that is, going around to look for an on-heat female. Also, neutered dogs become less aggressive to other competitors who may be interested in the female.

Neutering makes testosterone levels to go down extremely. Although that happens, it doesn’t mean that the fixed dog will not keep trying to mate. It will. Changes in its behavior will occur after weeks or months. So, a neutered dog will try to get a female, but the more time flies, the more the behavior downs.

3. Whether The Dog Is Brought Up In Isolation Or Not: If your dog keeps trying to mate, you may have brought him up among others of its kind, especially females. Dogs who get isolated from other dogs during upbringing have trouble with their mounting skills. Their interaction with other dogs creates a psychosexual basis for understanding what mating is. If your male best friend has an all-dogs clique, they will mount, hump, and express their sexuality overtly until it gets into your nerves.

4. Whether The Female(s) Of Interest Is Spayed Or Not: This statement and the rest that follow it focus on your dog’s woman, or women. Your male dog will not be attracted to a female who has gone through spaying.

Your male dog may, however, try to hump a fixed bitch. While many experts see this as sexual behavior, it is a show of dominance. The humping may not even lead to penetration because, at the back of the dog’s mind, the idea is to say ‘I am the one!’ to the female. Sexual gratification may not be on its mind.

5. Whether The Female(s) Of interest Is On-Heat Or Off-Heat: Your male dog will most likely be attracted to a lady dog that is on heat. Depending on the breed and age of the female dog, ‘heat’ comes about every three, six, twelve of twenty-four months. In the heat, the female experiences some internal sexual changes that build to a climax. During proestrus, she is ready and willing to mate.

When she is on her ‘true’ heat, your male dog will fall into her flirtatious routine, which includes backing into him, reflecting, and twisting her tail provocatively. Also, the swelling of her vulva and bleeding becomes hard to resist for the male.

An off-heat female will have a very low libido, so any male dog will not keep trying to mate with it.

6. The Female(s) Of Interest Is In Her Gestation (Pregnant): When a female dog is carrying a litter in the womb, she will not be receptive to mating. She will not display any flirtatious behavior, and so, male dogs around it will not be attracted to her. If a male tries to mount on the pregnant lady dog, she will growl, turn or snap to make sure that his efforts get rebuffed. This behavior will demotivate the dog, and he will stop trying to mate. If he is the patient kind, he will wait until after she gives birth and goes on heat. If he isn’t and has deep-lying sexual urges, he will go around looking for another female to dominate and penetrate.

How Do You Know If Your Male Dog Wants To Mate?

Knowing your dog’s readiness to mate helps you to learn all you need before breeding it. Also, it helps you to stay alert if you don’t want the dog to mate. With male dogs, here is an explanation of the behavioral changes that may occur when the desire to mate comes:

“Since male dogs don’t go into heat like their female counterparts, the females are the ones who initiate the game. In her urine, she releases a scented and sexually-arousing hormone. The male dog picks this scent. If she is around, the dog will focus entirely on her. Instantly, his aggression increases, and he starts to track her down.”

“When ‘it’ happens, the first thing is that the male becomes calm when he had previously been grumpy, agitated, and hyperactive. In a way to appreciate her, the dog may stick around the female, licking her all over.”

Also, a dog that wants to mate is often fertile. The factor that comes to play here is age. When your dog is seven months old, it is ready to mate. Although it wants to, you shouldn’t allow the dog to breed until it gets to eighteen months. You may consider taking it for a neutering surgery.

Do Male Dogs Go Crazy When A Female Is In ‘Heat’?

They do. When the male launches an attack on the female, he may follow her for up to three miles – crazy, right? Also, he may fight off with other dogs who may have picked up her scent too and are pursuing her. The battles may make the male pick an injury, even a fatal one. If the dog was eating and then sniffs out the scent, it will abandon its bowl of tasty protein and go for the mate.

How Long Does A Male Dog In ‘heat’ Last?

Scientifically, male dogs usually don’t have a heat cycle like their female counterparts. We could say, however, that their libido keeps tingling as long as their prospective mate is on heat. The female’s heat cycle lasts for about fourteen days, and during this time, the male dog will get as heated up as he can. If he gets a chance, he may mate at least twice a day.

So, the male dog’s flame lasts as long as the female is on her cycle of heat.

Should I Neuter My Dog?

Yes, you should! I will back up my answer by bringing to your attention the benefits of the procedure. Also, I will blow the bubble of misconceptions that floats in and around the surgery.

1.The Procedure Is Cost-Effective. If you have an unneutered male living with an intact female, there is a likelihood that your house will be full of litter. It takes a lot of attention and money to care for the puppies. If the male gets fixed, you’ll have control over the dog’s population. Also, you will avoid pups overwhelming you, forcing you to give some of them up.

2. It Controls Your Dog’s Movement. As capture here, intact dogs can go miles tracking down an on-heat female. Having a lower-than-low libido, a neutered dog will not roam around. This lack of sexually-motivated runs prevents it from (road) accidents that may occur during the hunt. Also, the neuter will not get into a she-is-mine fight with other dogs, where he could suffer fatal injuries.

Remember, a dog whose libido is loudly tingling will try to be as creative as they can be to escape the confines of the house.

3. It Improves Your Dog’s Personality. Neuters turn out to be very calm animals that don’t get erratic, aggressive, or agitated. Also, they hardly engage in the she-is-mine fights with other males. Unneutered dogs will mark their territory (read female) using urine – a behavior that is popular among wild animals. I am sure that you wouldn’t want your canine buddy to behave wildly, would you?

4. It Helps Mitigate The Chances Of A Cancerous Infection. When an intact dog grows older, it may develop testicular tumors. Those painful infections are the most common for intact dogs. When you take a dog with genital tumors to a vet, they will recommend neutering as the primary treatment method. Why don’t you save yourself that possible trip to the vet by sterilizing your dog while they are still young?

1.Overweightness – many dog lovers have the misunderstanding that neutering their male companions will make them gain a couple of pounds. However, this is false since it lacks scientific backing.

2. Zero-Quality Life – well, some claim that neutered dogs live a low-quality life when they age, which is untrue. Instead, because of the low levels of testosterone, the neuters will remain calm and engage in less life-risking tasks.

Now, saying yes to the procedure isn’t difficult, right? Veterinarian practice advises that you do neutering when the dog is at least six months old. However, eight-week-old pups can undergo the procedure as long as they are healthy.

Since you’re going for it, here are some post-surgery tips you should know:

1.Keep the dog away from deep-water baths for at least two weeks.

2. Make sure that the pet doesn’t lick the area to avoid infections. Whenever you see the neuter trying to do it, use treats to distract him. If that is not doable, fit an Elizabethan collar around his neck.

3. Keep the dog still and prevent it from upping and downing to make sure that the recovery is smooth.

The surgery to get Doggie fixed will cost you at least $35 and up to $400. The disparity arises because of the different clinical quality. Low-cost vets will charge relatively lower compared to regular vets.

When deciding on how much dog neutering will cost, vet clinics will use weight as the primary determinant. Weight influences the other factors, such as the amount of surgical anesthetic to get used and the physical exam that the dog will go through before the surgery. Here is the weight-cost distribution

After the physical and health exams, the health of your dog may tweak the cost. Unhealthy dogs require less anesthetic and close monitoring as compared to healthy ones. The use of oxygen and blood-pressure monitors attracts extra in-surgery charges.

Here are specifics of some of the costs that may come about when you go for neutering. Some of them are necessary additional costs while others are optional:

How Do You Stop A Male Dog In Heat?

The way you neutralize the effect of a tingling libido is by social distance – yes, this isn’t for Covid-19 only! Whether neutered or unneutered (mostly unneutered), your dog is likely to pick up heat, especially if there is a female around who is in her heat cycle.

For the fourteen days that the intact female is on heat, keep the male a distance away from her. A tingling libido is beyond control, so intervene by putting the female outside and the male inside. I am pretty sure that he won’t pick out her scent from his little outdoor kennel. While doing this, make sure that the dog doesn’t go outside of the outside (get it?).