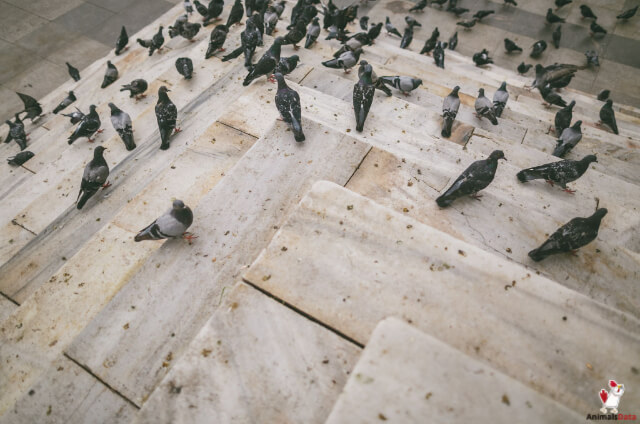 During the night-time, pigeons fly looking for shelter – like many other birds. During their flight, they may perch on trees, but the pigeon is not your average bird. It prefers more shelter – more than the trees. It may go and rest in an abandoned house, a bridge’s underside, a cliff side’s recess, et cetera.

Other times, you may find a night’s pigeon looking for a flat place – something like a ledge. In that plateau-like area, it roosts. When the sun sets in the city, it brings pigeons to the office window ledges. There, they may build a nest and lay eggs. In the countryside, pigeons will nest in barns and shelter there during the night.

Where a pigeon closes its eyes depends on its situation. If it’s a bird parent and either has babies to nurse or eggs to hatch, it will spend more time in the nest. During parenthood, therefore, the place of sleep is the nest. Roosting in the nest could take up to 5 weeks. During this period, the pigeon takes care of the born squab until it is old enough to go its way.

On the other hand, a pigeon with no parental or pre-parental responsibility is likely to sleep anywhere it wishes. It takes the free-element lifestyle, moving from neighborhood to neighborhood and homing in on any viable place.

The first thing pigeons do to stay out of the menu is by getting flocked together. Since the birds are social animals, it is easy to see them flying together, and this move discourages predators immensely.

Also, the birds shelter together, and this helps the pigeons to defend themselves during an ambush. Some rats and cats have a healthy appetite for pigeons, and togetherness makes alerting easier. Whenever an enemy attacks, the birds will flap their wings in an alerted way. When the pigeon does that, all its friends will get the message and disperse.

Do Pigeons Fly During The Night? Why?

Strictly, pigeons are birds of the daytime. People walking the night, however, have sighted seeing pigeons cut through the sky during the night. So the question begs, are pigeons nocturnal animals? No – they are not.

You will never see a pigeon leaving its place of shelter unless there is a threat or a disturbance. Here are some of the reason for pigeon’s night-time take-offs:

1. Predators – I have talked about the protective measures that pigeons take to stay off the menu. The other pigeons who hear an alerting flap will take their chances by flying out of the shelter, which is now a danger zone.

2. Sudden, loud noises – If you see pigeons flying, it could be that their night was interrupted by human noises. All species deserve to have a good night’s sleep – everyone, including pigeons.

3. Parties – Parties are loud – no doubt. Pigeons are peaceful birds, and they surely don’t want to get caught up in all the noise. So, you will see them flying to escape the noisy disturbance.

When Is It Sleep Time For Pigeons, And How Can You Help Them Sleep Better?

Generally, there is no exact sleeping time for pigeons and birds. They may be asleep at any time of the day. However, some advanced studies have shown that the winged creatures start their bedtime between half-past seven and eight o’clock.

Darkness is the trigger for sleep, and a diurnal (nocturnal) bird will find a comfortable spot, and soon after, it will start sleeping. Interestingly, birds sleep semi-consciously, unlike us humans. The pigeons do what we call sleeping with one eye open. That explains why birds, although seeming like in a deep sleep, will fly off quickly.

Helping The Birds Get A Good Night’s Sleep

If you have pigeons nesting in your office or home building and you want them to stay, do the following:

1. Switch off all the light – Light is an anti–sleep factor, and you should know that. Your birds will not think it is dark until all the lights are off. Make sure that the birds are not deprived of their sleep because they could suffer a breakdown.

2. Reduce the night’s noise – Keeping the noise at its very minimum will provide a good ambiance for the birds to sleep well. Loudness will increase the birds’ anxiety levels, and eventually, they may move to a different place. Do you want that? I guess no.

Let’s put all the sleepy business aside and explore the birds. Many animals out there are not as humble and oft-maligned as the peacefully-feathered pigeons. We share our suburbs, cities, food, and even drinks with these birds, and we love seeing them take off and land.

In this section, you will know some things you may not know about pigeons. Sneak-peek: these are some of the beautiful reasons why you should appreciate the birds.

1. They Were The First Bird That Was Domestic By Humans.

So, you thought chickens were number one? You were wrong! At the start of civilization, humans were already relating to pigeons. At that time, they were called rock doves. If you look at some pre-historic tablets, you will see pictures of the bird. This proves that there was interaction way before life happened. And I’m talking about 5000 to 10000 years ago.

2. They Can Do Mid-Air Stunts!

Apart from being a bird, the pigeon is an acrobat. Sometimes, you may see it performing backflips as it is flying. Experts do not know the exact reason why they do that. But, the mid-air backflip has been seen as an anti-predator tactic. Also, they may flip when pursuing prey.

The other reason is that pigeons are only having fun. The backward rolls and somersaults are an excellent way to show the bird is unique.

3. They Can Ride The Subway Pretty Well

Yes – don’t make that face. Train drivers have reported having seen pigeons walking into trains. Then, the pigeons stay on the train until it stops, and the birds leave comfortably. This should communicate to you that they are intelligent. And more – they are model passengers!

4. They Pick Out People That Love Them.

Pigeons have a memory which matches that of the elephant. You may think that with all the flying that they don’t look at people. Instead, pigeons are likely to remember some faces that they see as they fly across. A study that looks at pigeons in the French city of Paris gave the world this ‘memorable’ development.

The research included offering the birds foods and chasing them away – one researcher fed, the other chased. The experts observed that pigeons were drawn to the feeder and away from the chaser. The same behavior was recorded even when the researchers decided to make a change of clothes.

5. The Birds Have A Vision That Is Out Of This World!

Do you know wine connoisseurs, you know, those that can discriminate which wine is which? If you do, then pigeons are the connoisseurs of colors! The birds’ extraordinary vision makes them able to differentiate between nearly identical color shades.

For pigeons, their world is in so many colors. Humans have a tri-color perception system, which is a shade of what pigeons have.

6. Unbelievably, They Know The Alphabet!

If you’re looking for dullards, you won’t find any in a flock of pigeons. A particular study noted that the birds could learn and discriminate against each alphabetic letter. The report also studied that they understand A – Z even better than humans.

7. They Are Mathematical Geniuses

Well, this one is so extraordinary. They have impressive math competence as they can learn the following:

The only animal that is as mathematically competent as the pigeon is the rhesus monkey.

If you know about the psychological genius that was B. F. Skinner, you already know about this one. As a behavioral expert, he was successful in making some pigeons engage in a game of Ping-Pong.

9. They Have Been Heroes Of The War.

During WW1, a pigeon saved up to 200 American troops. It was the final weeks of the war, and the soldiers were almost in the hands of their enemies – German troops and mistaken allies.

At that tense time, they used Cher Ami, a pigeon, to give a message. The pigeon was shot at several times once it left the bunker, but it delivered the note. It was then awarded an honor.

They don’t look like they can fly that fast, but they can. In brief flight burst, the pigeon can cut through the skies at lightning speed.

Records have it that pigeons can even outrun the internet. A pigeon by the name Winston impressed South Africa by delivering a memory stick (40 GB) to a place 60 miles way in just over one hour. The upload took 2 hours. That’s fascinating!

11. They Were Involved In The Making Of Reuters

Do you know Reuters? The international news agency? Well, when Paul Reuter was brainstorming on how to better information distribution, he used carrier pigeons. The pigeons delivered correspondence widely, but they got fired when Reuters opted for the telegram.

After carrier pigeons impressed people on the correspondence business, they got absorbed in the photography world. The pigeons got fitted with a special camera. After the snappers were strapped on the bird, the pigeon would be let to fly.

13. Pigeons Only Have One Lifetime Partners

Of all animals, the pigeon is unique in its monogamy. When two pigeons like each other – they will love, live, and die together.

14. They Have Super Parenting Skills

Being great parents comes from the monogamous inclinations. You would expect that only the female bird will incubate the eggs, but you’re mistaken. Because of the need to rest and eat, the birds take turns in hatching their eggs.

15. They Have The Cutest Babies!

Try and look up how a chick pigeon looks – beautiful to the core. The doting parents of the chick do not let them leave before they are grown, so their cuteness is rarely seen.

Aren’t pigeons fascinating? As they say, there is indeed more than meets the eye. Whenever you see a pigeon, always remember these details that make it the most exciting bird.

What Winter Birds Do During The Night-Time (Tabulated)

The only birds you will find around you during winter are residents. I have prepared a table to show you how friends of the pigeon do when the night comes in the winter season. Check it out: