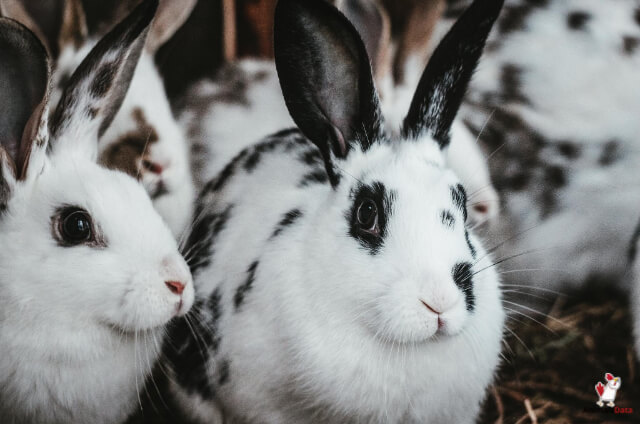 Well, they do not. Rabbits do not have a menstrual cycle because their ovulation has to be induced. For a doe’s (a female rabbit) eggs to be released, she needs to be mounted by a buck (a male rabbit). Once the mounting happens, the process will start, and it never ends in periods but with conception. This means that no released egg can lead to periods because they get fertilized most of the time.

A female human has periods because the released egg does not get fertilized. The uterus of a sexually mature woman prepares for pregnancy, which does not happen. Then, the thickened lining starts to shed off in the form of periods. If you look at the female reproductive situation, you realize that periods are dependent on the events surrounding ovulation.

In the following section, you will get an extensive answer to the question – everything you need to know. Read on, and assuredly, you will feel more powerful at the end of the read.

Rabbits And Their Periods – Every Little Thing

If you notice some blood coming out of your doe’s genital area, it would be natural to start wondering if they have periods. Since many breeders and rabbit owners are seeking answers to this question, I have taken it upon myself to conduct some research. In this read, I am presenting my findings. It is not a pleasant experience to see blood on your rabbit’s area. When it happens, and you’re not sure why or can’t locate a cut, you need to visit the vet.

With that already said, you need to be aware of many other things. Let us now look at the topic extensively. We shall see the reason why rabbits don’t have periods and why they may be bleeding.

The Science Of Induced Ovulation

As established in the starting paragraph, rabbits experience induced ovulation. This means that their response to certain stimuli cause the reproductive process to occur. The stimuli include suitable mates that are in close proximity. The more favored stimulus is the physical mounting by a buck.

When a female rabbit responds to ovulation-inducing stimuli, they enter into what is commonly known as heat. This heat period runs and is maintained throughout the year. So, rabbits are usually on heat all year long. A doe that has just delivered a litter can get pregnant almost immediately, provided that there is a sexually mature buck around.

What you should know is that no bleeding comes with induced ovulation. So, you shouldn’t expect to see any blood from the does during this phase. As established, rabbits follow what is scientifically know as an estrus cycle. This cycle contrasts with the menstrual cycle, which is the biological alignment for some mammals such as humans.

Female Rabbits And Their Estrus Cycle

Does, or female rabbits, usually become sexually mature at a young age in their animal life. Typically, a doe starts her first heat period between 4 and 6 months from birth.

The heat period of rabbits is responsive and highly dependent on the conditions and the environment that the animals live. So, heat periods will either be reduced or increased depending on the likelihood of sexual activity. Here follows a table showing the symptoms of a female rabbit that is ‘heated’ up:

When a rabbit gets pregnant, the baby carrying lasts for around 30 days – a maximum of 33. At the end of this month-long gestation, the doe will deliver between 1 and 5 kits or a litter of baby rabbits. After birth, the mother doe will start nursing (or lactating). This is her only way to feed the kits.

It is possible during this lactating period for the same mother doe to get pregnant again.  When they say ‘breed like rabbits‘ that is what they are usually referring to. The breeding between rabbits happens very often and very quickly. If not controlled, rabbit populations can get out of control.

For this reason, you are supposed to be very careful, especially if you have both female and male rabbits. If they are going to stay together, they will most likely breed and do so at an alarming rate. If you are not willing to keep them apart, you need to consider sterilization as a control option.

How Long Do Does And Bucks Stay In Heat

As alluded elsewhere, rabbits will stay in heat for a long throughout the year. Heat doesn’t come and go as it operates with dogs. Once a buck or a doe reaches between 4 and 6 months of age.

So far, we have established that female rabbits will not experience bleeding since there is nothing like female rabbit periods. If they bleed, though, what might be the cause of the sudden reddening of the area? The most common thing that many rabbit owners notice is red urine. This can give wrong impressions, that is, that the rabbit may be experiencing menstruation or having a severe condition.

Thankfully, fortunately, and for the most part, the red urine should not cause any anxiety or worry in the rabbit.

What Is The Color Of A Rabbit’s Pee?

Typically, the pee of a rabbit – be it a doe or a buck – will have a yellowish color, pale, and dark yellow. Other colors of normal rabbits pee are brown, bright red, and carrot orange. The factors involved in the urine color revolve around diet and hydration.

The most common cause of the changing of a rabbit’s pee is diet. When the pee is red, you can tie that to a pigment present in particular plant foods. Vegetables such as beetroot leaves are likely to cause change. If you, a human, eat beetroot, you will likely go through the same urine discoloration issue.

When the urine of the rabbit completely becomes white, it could be that the animal is taking in too much calcium. If the urine is overly dark, it could either be stress or dehydration. In both cases, you need to take the rabbit to the vet as soon as you can. The vet can administer various treatments, with one of them being fluid therapy.

Why Is The Urine Of My Rabbit Red?

As captured before this part, the redding of a rabbit’s urine does not imply that a medical problem is brewing. Harkness and Wagner, in their Biology and Medicine of Rabbits and Rodents, make a stern assertion based on credible research – it is rare for rodents and rabbits to have bloody urines. Many of the ‘bloody’ urine cases turn out to be vaginal discharges or basic urine, which is porphyrin-pigmented. The discharge can be associated with abortion, polyps, or uterine adenocarcinoma.

If you study that academic postulation carefully, you will see that the red urine does not imply that blood is being passed. Actually, the redding in the urine usually subsides once the pigment is completely removed from the rabbit’s body system. It goes back to its normal pale yellow color. This change-back will happen within a couple of days or weeks, and it will depend on the regularity and quantity of the plant material or pigment sources.

4. Consumption of spinach, carrots, and other vegetables that have high levels of beta carotene

While the redding of the urine may not be a significant issue, there could be an underlying condition. Since the problem could be more than a food pigment, the following sections will look at how serious the situation can get.

If you know and believe that your doe or buck is actually discharging blood, the first move to make is to go to a vet. The issue might not be severe, but it is crucial to get some guarantee. Apart from the pigment cause, here are more reasons why the rabbit may be bleeding:

2. Infections of the bladder and the kidney such as UTIs

4. Cancer of the uterus/uterine cancer

Here Are The More Explicit Descriptions For Each Of The Causes As Mentioned Above:

If you think a cut caused the bleeding, you need to do a full examination of the rabbit. Before the vet charges you for running his eyes through your rabbit’s fur, you can do it yourself. Ensure that you handle the rabbit with care since pressing against the cut could send some pain through his tiny body.

Before you take the rabbit to the vet, you can access the cut and make a decision. This should be based on how deep the cut is or how likely it will get infected. If it is an open wound, the vet will be able to stitch it up. A smaller wound will require you to keep an eye on it until it is naturally healed.

2. Infections Of The Bladder And The Kidney Such As UTIs

When you observe the urine getting red, a typical response is to think that there is an infection in the bladder or a UTI. Using your naked eye, you will find it challenging to observe blood in the urine caused by a UTI. If you think a bladder or a kidney infection caused the red situation, you should start paying attention to other behaviors.

A rabbit with kidney disease should be straining – that is something you can pick out. A straining rabbit usually takes up a funny and awkward posture when they try to pee. Moreover, the bucks or does may sit for long periods on their feet’ back with their tails pointing upwards.

If you notice this behavior, you should change the ‘delivery’ or litter box. This will help you to identify if they can pass any urine physically. If you can see some urine, even if it’s a few droplets, the issue is not very severe. If they cannot pass even some little urine, you need to rush them to the vet because that is an emergency.

The vet will conduct a urinalysis if passing the urine is problematic or challenging. If the bleeding is happening together with straining, the rabbit could be having a urinary bladder infection. If that happens, the vet will conduct other tests, including an X-Ray.

3. Cancer Of The Uterus (Uterine Cancer)

Although rare, the blood in the urine could be caused by a severe condition known as uterine cancer. This is likely to happen to older rabbits. Here are the main symptoms of a rabbit with uterine cancer:

1. Hematuria, Or Blood In The Urine – this usually originates from the uterus. The blood may not appear all the time in the urine; it does periodically. You are likely to observe some blood clots.

2. Cysts On The Mammary Glands, Or Mastitis – the cysts will have fluid that is either clear or cloudy.

3. Discharge From The Vagina – it will appear thick, clear, blood-tinged, or beige.

4. Aggression – the rabbit, will scratch and bite excessively.

If you notice any symptom that appears on the above-bulleted list, you should rush your pet rabbit to a vet soon. The vet is your best option since he will run numerous tests. The expert will be able to identify if any, the blockages and causes of concern.