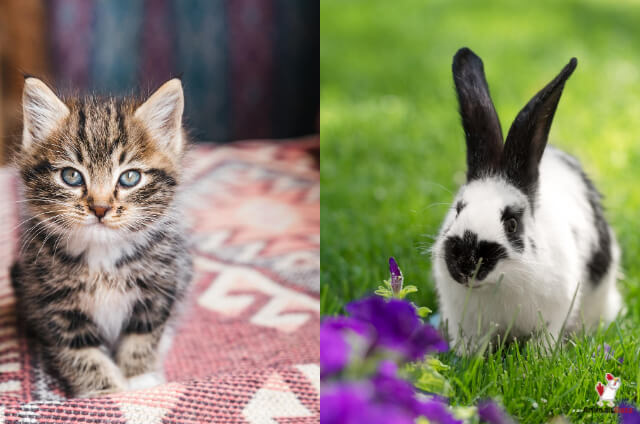 While it is possible to crossbreed some animals, it would be impossible for a cat and a rabbit to mate. Mating and crossbreeding require two species that have a close genetic relationship. Zebras, horses, and donkeys can all crossbreed because they have a polysemous genetic connection, but their offsprings are usually sterile. Cats and rabbits can try to hump on each other, but they can’t mate. Among the many reasons is that their genitalia are not compatible, so it would be awkward for both of them to engage sexually.

The other reason cats and rabbits cannot mate is that they are wired differently. While a cat is an omnivorous carnivore, a rabbit is a vegetarian and an obligate herbivore. The body of a cat is adapted for meat-eating, while that of a rabbit is adapted to eating vegetation. Even if you got a confused rabbit to hump on an even more confused cat, you would not get an offspring. There would be nothing happening.

Cats And Rabbits – In One Breath, Side By Side

If you’re reading between these lines, the best bet is that you are a pet enthusiast. In the spirit of trying to figure out who you are, I can say this: you probably have a cat and rabbit, or you’re getting there. The good news is that cats and rabbits can coexist without much trouble. The first thing you need to recognize is the vast differences between the two animals. That will be explained in this article.

The other thing is how the two are likely to behave around each other. If you stick till the end, you will get everything you need to know. Let’s get the ball rolling!

The Similarities Of Cats And Rabbits (With A Tabulated Touch)

Before we kick off this section, we need to note something: out in the wild, cats are mostly considered predators, and rabbits as prey animals. The following will explain how cats and rabbits are the same:

As mentioned when this section started rolling, the only difference is that one is a prey animal, and the other is a predator. This fact begs the question: is it safe for the prey (the rabbit) to stay together with a predator (the cat)? Well – it is very safe. And this changes because the environment is different. As pets, cats do not need to exert their predatory behavior because their pet parent guarantees their survival. Instead of active hunting, the cat will have a bowl of food every mealtime.

So, you can keep cats and rabbits together under one roof. The only thing you definitely need to do is learn how to make it happen.

More And More On The Subject Of Comparison

As mentioned earlier, rabbits are herbivore animals and like to spend a lot of their daytime chewing on blades of hay. On the other hand, cats are carnivorous and love meaty meals. Rabbit poop is in pellet form, very dry, and does not smell. Also, it can easily be cleaned, even if they litter around the house mistakenly. On the flip side, cat poop is awfully smelly. So, it is imperative to train a cat to use a little box. This will go a long way in preventing lousy odor from running throughout the house.

Another thing would be that rabbits are less active than cats. Yes, it is agreeable that rabbits like running around and jumping, and they will get excited when you come home, but cats are fierier with their attitudes. But the deal is this: your pet rabbit will only jump and hop from sofa to sofa. The biggest move he or she can make is climbing on your bed. However, cats can climb and jump high. Without hesitating, they will scratch house materials as they perform their aerial theatrics.

Cats are noisier and more passionate. This implies that they need lots of attention so that they remain calm. If you are a cat owner, you may not like the meowing of the cat since it can become irritating. Rabbits are peaceful animals that only make noise (thumping their feet) when they are either scared or annoyed. While cats can go for long hours without human companionship, rabbits cannot live without having companions. If you have one rabbit in your home, the bunny will try searching for your friendship. It will try to stay close to your almost all the time. While that may look cute, you may feel that the rabbit is too clingy. What you need to do is get several rabbits to live together in a cage. This way, they will all keep each other company when you are away.

Speaking about companionship, it would be best if you got your house rabbits spayed or neutered. If you don’t go for these surgical procedures, you are likely to have rabbit overpopulation issues. As you may already know, rabbits breed rapidly, and a litter can have up to 5 kits. Within a short time, your house will start looking like it is a rabbit farm.

Since cats can stay alone in the house, there is no need to get other cats. Therefore, there is no need of neutering them. However, male cats need to be fixed because if they remain intact, they will spray their urine all over in a bid to mark their territory, which is actually your territory.

Desexing a rabbit is not only for controlling their population. It is believed that a neutered rabbit is likely to live a longer and healthier life. Compared to rabbits, cats have longer lifespans since they can go up to 20 years of age.

Let us look at vet visits. Because of cats’ popularity (as they are number two worldwide), cats are not treated as exotic pets. However, rabbits, which are less popular, are considered exotic animals. When you take them to the vet, the rabbit is likely to be attended to more expensively, unlike the cat. Also, rabbits will need special vets – only those that deal with bunnies. Vets who deal with dogs are also likely to have specialized in handling cats, so it will be easy to get a vet for your cat.

Cats, Rabbits, And Getting Along Together

As mentioned elsewhere in the article, rabbits and cats have no problem being together. However, they need to be (or have been) introduced to each other while they were young. Also, proper measures need to be taken alongside the cat-rabbit introduction. In this section, you will be given some tips on how to bring the two animals together. During the entire time, you should know that rabbits and cats are entirely unpredictable. So, operate with high levels of caution. The following bullets are the tips for getting the job done:

1. You Can Start Small – Bringing Them Together For Short Durations Of Time. Over time, you can gradually increase their periods of interaction. This increase should be motivated by the rising comfortably of their new companionship.

2. First, You Need To Put The Rabbit In Their Cage. The cage should be built using small and impenetrable bars to prevent the cat from reaching out to the rabbit. Let the rabbit stay in their hutch for some time.

3. Let The Cat Come Near The Cage. You can always take the cat near the cage so that it keeps seeing the rabbit.

4. It May Take Some Weeks to some months for the rabbit to understand that the cat is not a threat. During the entire cat-rabbit interaction, you need to ensure that the rabbit remains in the cage.

5. If you take note that your bunny does not get startled at the cat’s sight anymore, you can pick the rabbit and put him outside the cage. Closely monitor how the cat will behave towards the now-freed rabbit.

6. Since the rabbit is the ‘prey,’ most of your focus and attention should be on the bunny. You need to pay attention to her reaction to note any change. Let the bunny continue its interaction with the cat. If you see any antagonistic behavior from the cat, you should immediately stop the interactions.

As implied elsewhere in the read, rabbits and wild cats are enemies. Out in the wilderness, a feral cat can attack a rabbit to make a kill and then a meal. In the shelters and homes, both animals are domesticated, and therefore, they can become good friends if they’re engaged when they are babies.

The two questions that you need to be asking yourself this entire time are these:

1. Is my cat calm and submissive?

2. Is my rabbit not aggressive and assertive?

We have discovered that for a cat and a rabbit to live together, the rabbit should be the assertive one and the cat the submissive one. If the situation is opposite to our discovery, there is likely to be a fatality. In that fatal case, the rabbit becomes equal to a prey animal, and the cat shows its predatory aggression.

If the situation is good, you need to maintain a keen eye on those two animals. If they decide to engage in lots of play, remember that a playful bite and cat swat can both cause severe injuries to the bunnies.

Final Words: How Are Rabbits Better Than Cats?

Compared to cats, bunnies are better pets because of their innate intelligence. Moreover, bunnies require less space. Cats usually want to occupy every part of the world, and they are likely to make more messes than rabbits.

If you’re torn between which animal to take home as a pet, it all depends on your preferences. I believe that you’ve gotten balanced information in this article that can swing your vote the cat way or the bunny way. To pen off this piece, I will reiterate the message from the article’s title: cat and rabbits cannot mate.