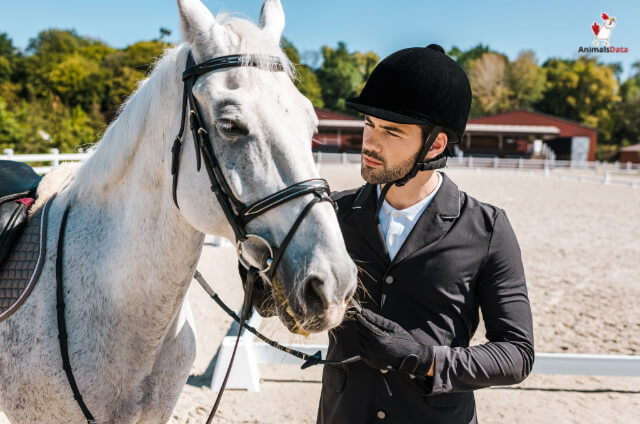 Generally speaking, the adaptations of a horse are like any other herbivore that grazes. So, their specific adaptations are for plant-eating. Here are two pointers on the same:

1. A set of high-crowned and strong teeth – these are suited for grass grinding and taking down any short vegetation.

2. Their digestive tract is relatively long – most of it is intestines that are concerned with breaking down cellulose from vegetation.

Young horses have baby (or milk) teeth. These teeth are shed when the horse gets to age two and a half. When the horse gets to 4 – 5 years, they have their permanent teeth (numbering 36 to 40). The high-prism molars and premolars that grow continuously out of the jaw. This happens so that the worn-out surfaces get replaced.

In this section, you will get to know seven adaptations that horses have to be the majestic animals they are. Read on.

During prehistoric times, humans use to hunt wild horses for food. Research experts put it out that horses were domesticated around 5000 years ago. History supposes that one tribe of the Indo-European area used the horse first. The tribe of interest lay in the steppes to the north of a mountain chain adjacent to the Caspian and Black seas. To acquire its current, present form, the horse got influenced by humans, food, and climate.

Humans and horses have always had a unique relationship. Humans see horses as partners and friends. Farm activities such as plowing fields have been done by the two parties together. Also, horses have transported harvest from farms, conveyed passengers, tracked cattle, and followed game animals.

On top of the subservient duties, horses have taken up combatants to battles (cavalries) and taken adventurers into unknown and unexplored lands. Also, horses have an entertainment value. They are part of carousels, jousts, tournaments, and ridings.

Horse influence has injected expression in the English language with terms like ‘cavalier’ and ‘chivalry’ coming up. These words have a connotation of respect, straightforwardness, honor, and manners.

1. A stallion is a male (masculine) horse that is fully mature. On the other hand, a female adult horse is a mare.

2. A stud is a stallion that helps during breeding.

3. A gelding is a type of stallion that has been neutered.

4. In the past, stallions were the only horses used in horseback riding. Mares, on the other hand, were kept purely to breed only.

5. Geldings use to do work such as plowing. Also, they were used as riding horses by ladies. However and in recent times, stallions have gotten replaces by geldings as riding horses.

6. A foal is a young horse; colts are male foals, and fillies are female foals.

The grass is the natural food for a horse. If a horse lives in the stable, the diet there consists of grain and hay. To avoid digestive and gastrointestinal problems, a horse should not get fed immediately after or before it gets working. For a horse, freshwater is essential mainly when the animals are getting rid of its winter coat. What you should know is that a horse should never get watered after working or when it is overheated. Foals need a lot of nutrients that can be offered by oats. If you want to feed oats to older horses, ensure that the food is crushed since the animals’ teeth could be worn down, or maybe, the horses may have digestive issues. Minced straw (chaff) can get added to the oatmeal of the animals that are greedy or don’t take time to chew grains properly.

If you want to substitute oats, you can choose crushed barley. Other available options include hay. The bulk of the animal’s ration is provided for by the grass. What people know as the mash is a mixture of water and bran plus other medications or invigorating additions. Mash is an excellent injection to the diets of horses that have troubled digestive systems and to those that have poor eating habits. Maize (corn) is a fattening cereal for the horse. But, corn increases the level and rate of sweat.

Horses need salt all the time, but they need it more when they are shedding. Trainers and riders who want to reward a horse should use the following tidbits – carrot, bread, and sugar.

Times of drought and poverty push horses to eat all sorts of food – beans, potatoes, and green leaves. In Iceland, horses are even fed fish. However, the options mentioned here are not taken if there are no grass-related foods. The commercial food industry has availed some mixes for modern owners and breeders – they contain vitamins, minerals, and other nutrients. Also, commercial foods are designed to offer a balanced diet when they get supplemented with hay.

The nervous system of the horse is developed highly and complexly. The horse’s brain faculties of memory, instinct, and judgment are fully functional. Horses are born not to fight danger but to flee it. To express fear at some moments, they may remain completely immobile. It is unlikely to find a horse that has brutally assaulted a person or entered into a fight with them.

Wrapping Your Head Around The Horse

A mare (a female horse), when crossbred with a jack (a male donkey), produce a mule. This animal cannot reproduce as it is sterile and hybrid. The offspring of a jenny or jennet (a female donkey) and a stallion (a male horse) are hinnies.

Like cattle, the horse does not have ruminant-like systems – which include multiple stomachs. With a long digestive tract, the horse has only one stomach.

So, is a horse a predator or prey? Well, looking at its behavior and physiology, you will see that it is one animal that depends on speed and reflexes to escape. So, it is a prey animal. The skeleton of a horse is like that of a human, and the only difference is on the shoulders; horse shoulder bones are not held in a socket. This adaptation helps them while running since it allows further reach. Like other herd animals, horses find safety when they are in groups. A horse that lives alone may develop stress. So, no horse should be left alone or get removed or its companions when ridden or handled.

As mentioned earlier, the eyes of a horse provide it with a 360-degree vision (almost). In the dim light, horses see well because they have ‘tapetum lucidum,’ which is an item that aids in light reflection into the eye. Also, they have better long-sightedness than humans, although their eyes see less color. The position of the horses’ eyes on either side of their face provide both monocular and binocular vision. The binocular vision is achieved by the horse looking forward while the monocular vision is achieved by looking rearwards and to the sides.

Another vision adaptation is that they have a ‘third eyelid’ or a nictitating membrane. This item protects and helps the horse’s eye from debris and dust when it is grazing.

Looking at the horse’s ear will open you up to yet another adaptation. The base of its ear is quite flexible, meaning that the horse can do swivels with their ears to identify predator sounds behind and in front of them. Also, the shape of the ear is adapted to conveying emotions.

Among the many fascinating creatures is the horse, or as classification call it, Equus Caballus. There is plenty to learn about stallions and mares, yet the spectrum is so broad. In this section, you will explore some awe-inspiring facts about horses. Read on!

1. These Animals Sleep In An Upright Posture – While Standing Up!

Most of their sleep time is spent on all fours. This doesn’t mean that they don’t sleep while lying down. But when they do, it doesn’t take a lot of time.

This is as true as it can get. The excessive wind that builds up to the upper intestines above the stomach gets released through the mouth – but not for horses; they belch nor burp. If they can, then it doesn’t happen the same way as it does for humans.

Also, horses can neither breathe nor vomit like human beings, that is, through their mouths. The horse’s digestive system is like a one-way street (non-ruminant). So, they do not regurgitate their food to chew it again.

3. Horses Can Live And Breathe Up To 30 Years And Beyond

This common question has a very surprising answer. Because of the knowledge of horse care, veterinary medicine, and horse nutrition has increased, equine longevity has also improved. This is similar to the developments that have been made in human life expectancy.

4. The World’s Most Popular Breed Is The American Quarter

This breed gets appreciated by both professional horsemen and beginner riders. You can look up this breed and know more about it and how it rose to fame.

5. In Arabian Horses, There Is One Less Vertebra

The Arabian horse is the one that founded the many other horses of the light breed. These Arabian mounts have some unique features: they lack a vertebrate, a tail bone, and a rib. This is as compared to other species.

6. The Unit Of Measuring Horse Is Called ‘Hands.’

To determine the height of a horse, the measurement used is called a hand. For example, a pony is an equine that is under 14.2 hands. This measurement detail applies to all but one – miniature horses; these are measured in centimeters or inches.

7. Those White Horses Are, In Fact, Gray

The many horses that we see as white were different at birth. The horses were born with a much darker color, and gradually, they turned white. These snow-white horses may start as chestnut, almost back, or bay colors.

8. No Horse Is An Island; No Horse Stands Alone!

In the wild, horses like to live in small herds. In domestic settings, horses feel nice and comfortable when they have companions. A lonely horse could develop stress. You can avoid that by bringing in another horse friend.

9. When A Horse Is At Rest, It Takes Around Four Breaths Per Minute

Isn’t that a low one? First, you must know the difference between respiration rate and resting pulse. When a horse is not doing work, it doesn’t have too much pressure, so why should it breathe too hard? However, this respiratory rate changes with distress and work. If you have a horse, ensure that you learn its TPR (resting pulse and respiration rate).

10. Nah-ah, North America Isn’t The Origin Of The Horse

All horses in the United States and Canada have their ancestral line drawn back to the European horse. The horses that many people take as ‘wild’ are, in fact, feral horses – their ancestors took their opportunity to escape from captivity when it came.

So, what is the difference between a colt, a foal, and a filly? Well, it all depends on age and gender. When a baby horse is born, it is known as a horse. However, this is until it gets weaned from its dam. Then, it is now called a weanling. Before horses pass the two-year mark, they are either colts or fillies.

12. The ‘First Horse’ Was As Sized As A Golden Retriever

Yes – the original ‘horse’ was nothing more massive than the dog breed known as the golden retriever. He (or she) was known as the Hyracotherium, and he may have looked like a deer or a goat – nothing like the modern horse.