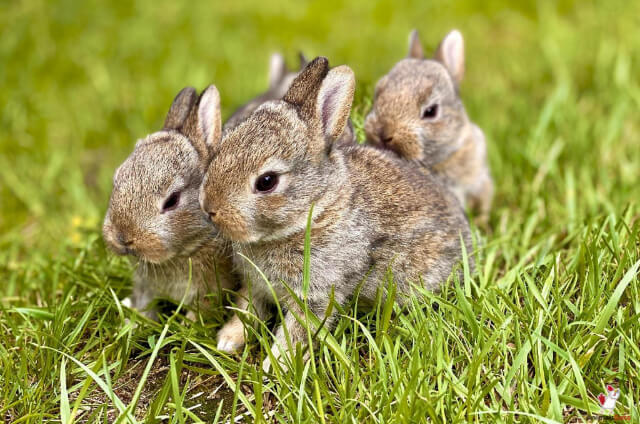 Quick answer – the scientific name of the rabbit is Oryctolagus cuniculus. You should note that rabbits are not rodents, meaning that they are not part of the order Rodentia. So, rabbits do not belong to the same category as prairie dogs, mice, rats, guinea pigs, and hamsters. They are more related to the hare.

Rabbits And Other Scientific Facts

3. Wild rabbit lives in deep rabbit holes or warrens, which are underground tunnels.

4. Some rabbits can make a long jump of about 10 feet.

5. Like other members of the Lagomorpha order and those of the Rodentia order, a rabbit’s teeth do not cease growing.

About A Bunny’s Scientific Name

Well, I’m sure that you’ve already seen a rabbit. It sits on its hind legs, which are often very large as compared to the front ones. And the ears are large and are either pointed or flopped depending on the specific breed. In terms of appearance, the rabbit and the hare share features, but there are significant differences.

Rabbits come in different sizes. For example, we have those which are about 8 inches long with a weight below one pound. On the other end, we have Chinchillas that are about 17 pounds. The largest breed, the Flemish Giants, weighs up to 22 pounds.

Bunny Science 101: How A Rabbit Behaves

Before anything else, you should know that rabbits are prey animals. This implies that they are always ready to escape when danger arises. Or sometimes, they will stay still for the threat to pass by.

For example, a rabbit will hop away when it sees a snake slithering in its direction. Basic rabbit movement is by jumping through whatever terrain to ensure survival.

What about eating? Out in the world, rabbits have been identified as grazes. When an eating session comes up, rabbits go on for about 30 minutes before they pause. Sometimes, they switch to eating their fecal matter, mainly because it has nutritional benefits.

In terms of diet, rabbits are strictly herbivorous and not vegetarian. So, if you have a pet rabbit, be advised to stick to these food options: hay, pellets, fruits, and veggies.

All active carnivorous hunters are rabbit predators, seeing that rabbits have good meat. Animals like coyotes, wolves, foxes, owls, and eagles have an excellent appetite for rabbits, and they won’t let one innocent bunny hop by and leave it alone.

As prey animals, bunnies take on survival techniques like hopping away or even thumping the ground. Rabbits also have excellent vision, meaning that they spot birds of prey from far away. When they see a large predator approaching, rabbits will jump into their holes or burrows. If they decide to hop, that will happen in a zig-zag fashion to confuse the predator.

If a medium-sized prey confronts a bunny, the rabbit can even bite. However, an intelligent predator will make a kill out of a rabbit quickly.

According to the IUCN, the wild European rabbit is listed as endangered. However, I believe that the pet rabbit population is stable, seeing that the threat of extinction is reduced by expert breeding and special human care. I think that rabbits will be around for a long time.

Let’s give a particular focus to Eastern Australia. Rabbits in that area keep growing even though humans are stopping their expansionist effort. Many people release bunnies in the wild, thinking that their population will reduce. However, rabbits reproduce quickly, and females experience induced ovulation, meaning that they can get pregnant hours after delivery. Read more to know what happens during rabbit mating season.

Rabbit Q And A

1. What Do You Call A Group Of Rabbits?

It goes by the name den or colony. While many people use the word warren to refer to a group of rabbits but that is erroneous. Warrens are actually the places where rabbits live.

2. What Is The Main Difference Between A Hare And A Rabbit?

Well, a hare is smaller but has large ears. On the flip side, a rabbit has smaller ears but is large.

3. What Is The Lifespan Of A Pet Rabbit?

As a rabbit owner, you will enjoy between 8 and 10 years of parenthood. However, it all depends on the specific rabbit breed; others will live longer and others, well, shorter.

4. What Good Places Can I Get A Good Rabbit?

The quickest way to get a rabbit is from a pet store or platforms such as PetSmart. If you want a pedigree rabbit, you will need to talk to a reputable breeder.

Winter and fall are bad times to look for baby bunnies since they won’t be available. So, look for them during summer and spring.

5. Are Rabbits Covered With Hair Or Fur?

6. Where Do Wild Rabbits Live?

Wild bunnies will find their home in woodlands, thickets, and meadows.

7. Out In The Wild, What Do Rabbits Eat?

8. How Many Kits Per Litter?

9. What Is The Scientific Name For Rabbits?

10. What Else Should I Know About Rabbits?

Yes. In fact, check any of the following articles:

1. Are Rabbits Vegetarians?
2. Should I Cover My Rabbit’s Cage at Night?
3. How Long It Takes for Rabbits to Have Babies?
4. Why Are Bunnies So Cute?