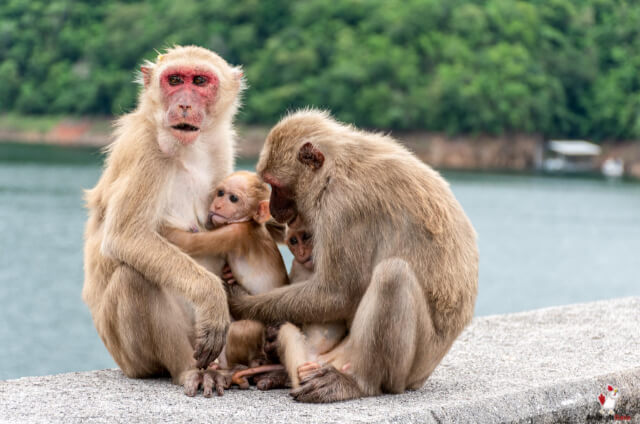 In the entire animal kingdom, monkeys are the closest relative to humans. They walk like us(mostly), possess unique intelligence like we do, and can even create and use simple tools.

Monkeys are very fascinating creatures, and these human-like traits cut across all species, with some species (like chimpanzees) possessing higher levels of it.

One more thing that makes monkeys quite unique as well, is that they too, like us, can live for a long time.

How Long Can A Monkey Live

Monkeys generally live between 20 and 50 years, although the actual lifespan of a monkey will depend on its species. Some species live longer than others. For instance, the lifespan of baboons and gorillas falls in the range of 40 to 50 years, while mandrills may only live up to 20 years.

A 20-50 years lifespan is quite a lot for an animal, and this longevity is another trait that makes monkeys similar to humans as well. Even dogs that we humans cater for, pet, and protect with all we have, only live for about 10 – 13 years, lions live for about 10 – 15 years, and rhinos, 40 years.

So why do these smart, and sometimes annoying creatures live so long?

Why Do Monkeys Live So Long?

Monkeys belong to the class of mammals known as primates. This class encompasses about 300 different species, including humans. Animals like marmosets, lemurs, tarsiers, lorises, and gibbons all belong to this group.

One thing that is common among primates besides their exceptional brains and intelligence, is their longevity. Humans are the longest-lived members of this group, followed by the apes and monkeys. Humans can love up to 100 years, chimpanzees can live up to 50 years on average, Orangutans 50 years, and so on.

Monkeys age just as slowly and gracefully as humans, and most times their lifespan may be prolonged if they are well taken care of. It has been discovered that monkeys live longer in captivity (zoos and animal reserves) than in the wild.

Different Monkeys/Apes And Their Respective Lifespans

1. Spider monkey – These monkeys are known for their black color and long tails. The name “spider monkey” came about because they look like spiders when they hang upside down from their tails, with their legs and arms dangling. They also do not have thumbs. They can live for up to 27 years.

2. Capuchin monkey – These new-world monkeys are easily identified by their white face and cream-colored coat around their necks. They are sometimes kept as pets. Capuchins have an average lifespan of 25 years.

3. Baboon – Baboons are probably best known for their tailless, red, hard buttocks. They are one of the world’s largest monkeys, consisting of about 5 different species. They have a life expectancy of 35 years.

4. Gorillas – This almighty ape, or “King Kong” as some movie lovers would call it, is the largest of all monkeys/apes. Standing at 6 feet tall, they are well noted for their exceptional strength and power. Gorillas live for about 40 years or more.

5. Chimpanzees – Chimpanzees are a very common species of apes native to Africa. They are large (second in size to gorillas), and are the most intelligent of all apes, with incredible learning and problem-solving abilities similar to humans. They are regarded as the closest animal cousins to humans and are said to share about 98% of our DNA. They have an average lifespan of 50 years.

6. Orangutan – Another large and intelligent ape, the Orangutan is well distinguished by its long, orange fur, and its love for trees. Their name means “people of the forest”. Adults can weigh up to 90kg and stand at up to 5 feet in height. Orangutans live for 50 years.

7. Mandrill – Noted for their bright red coloration at maturity, mandrills are a class of monkeys very similar in size and shape to the baboon. They are mainly found in the forests of Cameroon, Gabon, and Congo. Mandrills are the heaviest monkeys, weighing as much as 64kg. They live for about 20 years.

8. Proboscis monkey – Also known as the long-nosed monkey, this Asian monkey has an unusually large nose and a long tail. It is believed that there is a direct correlation between nose size and sexual maturity in males. Probosci’s monkeys are the best swimmers out of all primates and are said to have 9 stomachs. They can live for about 20 years on average.

9. Macaques – Probably the most common monkeys you’ll find in Africa and Asia, these monkeys number about 23 species in total and are the most widespread monkeys of all. They are highly intelligent and are usually the choice monkeys for experiments. Macaques live for about 20 – 27 years.

10. Gibbon – Gibbons are small apes found in the tropical forests of Southeast Asia. They can only grow up to a height of about 37 inches and weigh 12kg at most. Gibbons live for 30 years on average.

11. Squirrel Monkey – Named after their small size, quickness, and tree-loving nature, these new world monkeys are sometimes kept as pets. They grow to about 37cm in body length, and can only weigh up to 1.2kgs. They live for up to 25 years.

Why Do Monkeys Live Longer In Captivity

Monkeys live longer in captivity (zoos, animals reserves, etc) because they do not suffer most or all of the under-listed factors.

1. Predation: Monkeys in the wild are prey to lions, tigers, and other big carnivores. The chances of a monkey escaping or outwitting its predator reduce as the monkey gets older. This is why the lifespan of monkeys in the wild falls short by 10 or 12 years compared to those in captivity. Monkeys in the zoo are protected from predators, so they die a natural death.

2. Food Shortages: Monkeys, just like all other animals, experience food shortages, especially during winter or drought seasons. Older monkeys in the wild may not be able to endure the hunger and may die before reaching their peak age.

3. Harsh Climate: Harsh weather and environment also make some animals including monkeys die before their time. Sometimes certain weather or environmental conditions may cause sicknesses that older monkeys and newborns can’t survive.

4. Competition: Monkeys in the wild compete over food, mate, and territory. This is more common among males when they’re trying to win over a mate. The fights can sometimes be very serious, with life-threatening injuries.

Animals in reserves are always under surveillance and care. They are well-fed, well sheltered, well protected, and even have access to medicine. Wild monkeys don’t enjoy all this luxury, so they can’t live as long as they should.

The General Rule To Predict A Monkey’s Lifespan

In summary, smaller monkeys and apes do not live as long as the larger ones. This is why large apes like baboons, chimpanzees, and gorillas are the longest living of all primates after humans. The oldest living gorilla is 64 years old. Some chimpanzees kept at zoos have been reported to live up to 70 years before dying.