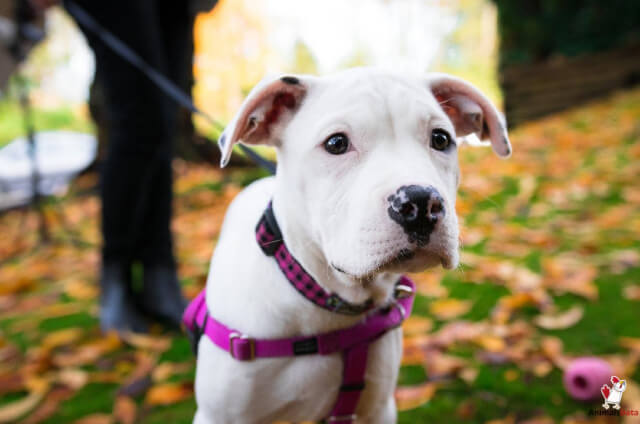 The Dogo breed of dogs is a sporting and working breed of the canines that have two known types – Argentino and Canario. However, the more popular of the two is the Dogo Argentino. It was the successful work of Dr. Antonio Martinez, who was a surgeon and a medical doctor in the early 20th century.

About The Dogo Argentino

The dog is a crossbreed of the Cordoba Fighting Dog (now extinct) and the following purebred breeds:

Quite a big dog, right? So, the dogs of the Dogo breed take appreciation for their big-game hunting ability. The variety has a friendly, cheerful, and humble temperament and relatively high predatory instincts.

The Journey Of The Dogo Argentino

In 1928, the late Dr. Martinez bred the dog. The doctor was an avid lover of the canines. He usually took them out hunting during weekends. In his hunting escapades, he felt the need to create an all-powerful canine that would serve his hunting needs in the best way possible. Have this in mind – Argentina is a relatively mountainous and highly heterogeneous area, and so many Argentinians go out hunting for pumas, mountain cats, peccaries, wild boar, and other predators. This breed would serve such sporting adventures well.

At that point, he took the Cordoba Dog and using it as a basis, Dr. Martinez bred it against some purebred dogs. That is how the engineering of the Dogo Argentino came to be.

When the dog came of age, he went on hunting adventures with Dr. Martinez. The doctor noted that he was able to pounce and paralyze, among others, mountain cats. Apart from that, the dog proved loyal and loving to his master. With this finding, the doctor could now make him a family companion.

In 1973, Dr. Martinez’s brother, Dr. Augustin, put great efforts and work to make sure that the breed got accepted, and it was. The FCI (the international body that studies dogs) accepted the variety, becoming the only one from Argentina, and the first one for that matter.

It was not until the New Year’s Day of 2020 that the American Kennel Club (AKC) recognized the breed as part of the working group. It is now AKC’s breed number one hundred and ninety-five (195). Before 2020, it was resting calmly under the AKC’s mixed (or miscellaneous) group, where it had stayed for quite a long time before gaining recognition.

What Are The Physical Features Of The Dogo Argentino?

The Dogo Argentino is a massive, if not a large canine. Also, it is well-built, having solid muscular compartments. Here are the specific details of the breed:

1.The dog has a broad, deep-set, trough-like chest.

2. There is plenty of skin around the neck muscles.

3. It has a massively-sized head, which has a rounded front-to-back shape.

4. Concave muzzle that bends slightly upwards. Also, the muzzle is the same in length as the dog’s skull.

6. Its teeth meet in scissor-bite style.

8. Well-set-apart eyes, being hazel or dark/light brown. Eye rims are either black or pink.

9. Highly-set ears. Most times, the hearings get cropped to improve their erect posture. Also, they get shaped triangularly.

10. It has short-hocked, muscular thighs.

11. The dog has powerfully-built hindquarters that have medium angulation.

13. It has a long, thick tail. Also, the tailpiece reaches the hock as the dog carries it on a natural low.

15. It has a dark spot around the eye. However, most clubs do not accept this feature as a standard of the breed. However, the FCI accommodates the trait.

You cannot doubt the athleticism of the Dogo Argentino. With a balanced body, the dog affects its surroundings as being an explosion of lots of power and extreme energy. The dog’s robust stature and quicker-than-quick reflexes speak of its impressive hunting prowess.

Looking at the breeds that got involved in the breeding of the Dogo Argentino, it is clear that the canine is always ready for game chasing and great game takedowns. His demeanor gives an impression of a highly-alert dog that looks robust even without making a move.

Is A Dogo Argentino A Good Family Dog?

Although a tough, almost-wild dog, this breed works very well for families because of its loyalty value. Albeit being a good family dog, the dog has predatory instincts, and it needs to remain enclosed, that is, within the compound. If not, its prey drive will kick in. Then, it will let itself out to wander, and it may start chasing small animals.

As you take it into your house, make sure you let it socialize with everyone that visits, even other pets. Let it get accustomed to anyone and everyone who frequents the house so that it doesn’t behave erratically or aggressively towards them.

This social freedom will reduce the dog’s natural caution. Also, do not leave it alone for too long. Its courage, dedication, and determination will improve your home’s warmth and security. The Dogo Argentino works wonderfully as a watchdog, and it responds to positive reinforcement excellently.

The Dogo Argentino is suitable for a home that has no other pets since it is highly territorial. If left untrained, it will often get into trouble with other smaller animals around the place. Since it has hunting inclinations, be advised to expose it to a lot of physical training. The exercise should last for at least sixty minutes.

In terms of feeding, the dog’s diet should be of high-quality, high protein food. It may grow up to a weight of between 80 – 100 pounds. Also, it may get to a height of between 23½ to 27 inches. Its life expectancy bracket is between 9 and 15 years.

Yes, but I am saying it that as a half-truth. The dog’s temperament considers it to be more aggressive than dangerous. Looking at the breeds that got put together to create the Dogo Argentino, it is okay to say that the dog is not a cute little Chihuahua. It is a working dog whose hunting value gets appreciated.

However, the breed can get belligerent and hostile. In Argentina, where the canine is well-liked, cases of the dog turning against its masters and killing them are in their multiples.

To make sure that the dog remains calm, it needs to get proper training. It should not stay locked in a kennel because its caution may levels up. Thus, it becomes more likely to cause harm.

Why And Where Is Dogo Argentino Banned?

Its aggressive inclinations have attracted its banning or ownership restiveness in the following countries:

12. The United States, in the cities of New York and Aurora (the State of Colorado).

In the countries mentioned above, the police may take legal action on you if you get caught in possession of the dog. The Australian government highly prohibits its citizens from importing a Dogo Argentino.

How Much Do Dogo Argentino Puppies Cost?

Depending on the dog’s breeding, sex, and age (puppy, young, adult, or senior), you may buy it from between $1000 and $4000. Crazy? I know. The price is that sky-high because getting legitimate breeders is not easy, and the few that are there choose to rocket the cost.

Adopting the dog is relatively cheaper since you can get one at around $300. Going this route will save you the pre-adoption caring expenses.

What Is The Bite Force Of The Dogo Breed?

Many say that the Dogo Argentino is aggressive and dangerous, but what are the numbers? It is time to look at the figures and get the facts. The assumption here is that all dogs mentioned are about to bite a human arm. With that in mind, we will investigate how painful or deep the wound will be if all the dogs would take a bite. We will pay attention to the bite force details of the two Dogo breeds against other nineteen popularly-aggressive bids:

So, what is the conclusion? The Dogo Argentino has its place in the biting world, but some dogs have it better than him. So, it may pose a risk to humans but not any worse than other powerful dogs.

Preferably, I would want to get bitten by a Dogo Argentino than an English Mastiff. Wouldn’t you, too?