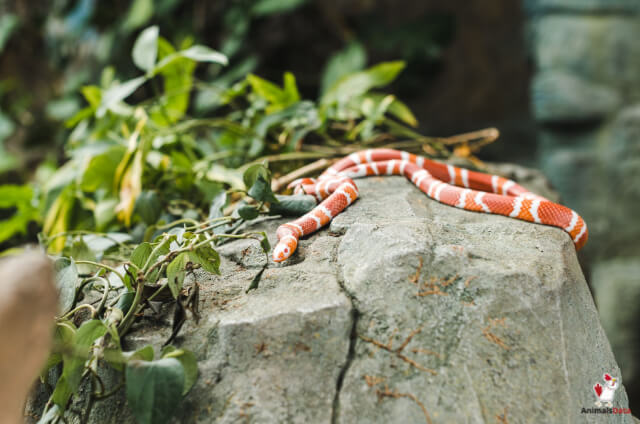 Usually, snakes do not travel in pairs, which is contrary to popular belief. Also, snakes do not nest together. In southeast Texas, the only one time that you might see multiple snakes in a single place is during the post-hibernation mating season. You will find the couple coiling around each other in pieces of metal or under old boards. While that is happening, the snakes are usually thermoregulating.

So, we have established that snakes are animals that live a life of solitude. They do not travel much and are always in and out of their hibernation dens. The young snakes move around, looking for a new home. During these times, the young ones will be seen with other sibling snakes.

The only snake species that operate in groups is the rattlesnake. When they birth to their young ones, rattlesnake moms stay with their babies for a couple of weeks. The following brief table looks at a few of the snakes and their group behavior details:

Snakes: How And How Far They Can Travel

How far can the wingless and legless snakes travel? Snakes are found worldwide – they are in all continents except Antarctica, where there are so many chills (see what I did there?)

Snakes can use at least two movement styles, but this number goes higher than that. While they may lack wings and legs, they have superior dorsal scales and ventral scales that work their magic to bring about movement.

So, how far can snakes even travel? In the blink of a human’s eye, snakes can cover a tremendously significant distance.

Snakes And Traveling: The How

Unlike other animals with limbs, snakes showcase different movement styles – they can crawl, climb, or swim. For one to understand the far that a snake can go, it is essential to know the progress speed among the snakes’ species. While some snakes move at lightning speed, others don’t travel with a rush.

In Southern and Eastern Africa, the black mamba can cover up to 20 km an hour. The locomotion (or movement) changes with changes in the surface (cement, grass, soil). This means that moving on the soft grassy ground will have a different slithering speed than movement on a cemented floor. Here are the different types of movement styles that snakes take up while they are traveling:

This locomotion style engages the skin and the muscles. These two items help the snake to move on a straightforward surface. This type of movement enables the snake to carefully and slowly travel in a straight line.

There is more contraction of the belly skin in the rectilinear movement than that of the ribcage skin and the back. Moreover, the scales on the underside grip onto the ground. The snake’s muscles help to heave the body forwards in a majestically flowing manner, which is the same as water waves’ motion.

Snakes with massive bodies such as the anacondas and the boa constrictors take on this kind of movement. This mostly happens when the snakes are in a confined environment. The snakes usually travel at a uniform speed. If the snake is moving relaxingly, they are likely to take on the caterpillar style of movement. If they need to move a little bit fast, they will likely change the movement mode.

The majority of limbless animals – earthworms, snakes, etc. – take on this style of movement. So, it is the most popular of them all. When a snake is taking on the serpentine type of movement, its body usually curves itself. Then, it forms S-shape loops on the horizontal ground that the snake is traveling.

This type of movement is possible and confined to areas which have obstacles. They include twigs, branches, rocks, and sand – items that are usually very difficult to walk on. While such materials give resistance to the progress of the movement, the S-shaped loops can push against it, allowing the snake to keep going. Consecutively, the snake keeps its back muscles active from the front to the back.

In each bend, the muscles are solitarily active, forming the part that is curved outwards to the one in the inner loop side.

As the snakes make its movement, the neck, and the head take on the lead while the rest of the body follows in the same path. Note that this style of movement cannot be accommodated by smooth surfaces.

In sliding areas that have mud or sand, this type of movement allows snakes to get going. It bears semblance with the serpentine kind of movement, especially in forming the bends, but there is a difference in a particular way.

The whole of the snake’s body usually creates static friction with the floor (or ground). Then, the segments of the snake’s body take off in particular parts that connect to the ground. What follows is that the snakes start moving with its head being forward. Then, its body follows carefully with a sideways motion. You will see this sidewinding movement in sidewinder rattlesnakes – that’s why they’re called that way.

The Concertina Type Of Movement

In this locomotion style, a snake will use its ventral scales to grasp a particular vertical surface. Then, it will pull up its body into alternative bends. Eventually, it will stretch its body forwards while it comes out from the curves. On the surface, the front part will become still. On the flip side, the back part will keep making bends repeatedly. Altogether, the movement will progress swiftly. This type of movement works best for snakes when they are either climbing or penetrating through narrow spaces by crawling.

Snakes And Traveling: The How Far

The question of how far a snake can travel depends on the motive. Snakes travel for any or some of the following reasons:

The other variable that determines how far a snake travels is its species. Some large-bodied species, like the rattlesnakes, don’t go too far – they like hanging around their habitat and waiting for prey to approach them. The bodies of these kinds of snakes are limited to moving within short distances. These short distances are made to locate a mate or relocate to a cooler or a warmer environment.

Black snakes, which are active hunters, will always go on hunting adventures. Before finding their prey, the snakes will cover a considerably long distance. The snakes that are elongated and have thin bodies are likely to be found in places with little food.

When the winter season ends, snakes that have been in hibernation will remain around. They will only move a little during the day to bask. When spring warms up, the said snakes will make a return to their habitat for the summer.

In their chosen summer spot, snakes move only for short intervals. However, some males will travel for long distances before they get a female to mate with. When winter comes around, snakes will start traveling to their hibernation habitats. They may even choose to look for a new spot – this may take them a few days up to a couple of weeks. Generally speaking, many snakes travel and move at a speed of between 4 and 8 kilometers an hour.

Many snakes choose to occupy holes that have already been burrowed by turtles, rodents, and frogs. Others can dig up holes in areas with sandy or soft soils. Snakes can stay in holes that vary in terms of depth, depending on its particular species and the season of the year. To exemplify, the common viper goes 60 inches far below the ground when it is wintertime. This is usually a hibernation move, an escape from the extreme coldness of the wintertime.

Other snake species, such as the pine snakes, can burrow holes as shallow as 12 and as deep as 42 inches. This entirely depends on the temperatures and the location. These holes usually provide dark and cold habitats that allow the serpents to hide away from predators and hunt secretly for prey.

The hognose snake is famous for burrowing. It can burrow a hole of at least 5 inches deep. What you should know is that many snakes do not engage in burrowing their holes – they just usurp power from other less powerful burrowers like rodents.

Can Serpents Remember Their Way Back Home?

Many times, snakes find themselves in new areas after they have translocated themselves. Many of the astonished snakes will try and trace their way back home. However, they tend to surrender to their new area and make attempts to create new homes.

Some snake species, such as the Burmese pythons, show a powerful and unique ability to get back home. In this situation, how far snakes travel depends on the species and the length of the distance to be covered.

Most translocations, however, expose the snakes to particular threats such as extreme climatic conditions. Because of their cold-blooded nature, the reptiles are unlikely to survive too-hot or too-cold weather. Also, new areas may introduce more powerful predators.

In the previous parts, the focus was on snakes and their traveling behavior. In this one, you will get to know some details of the truths, half-truths, and outright lies. You will be opened up to exciting things that people believe that aren’t true.

Many museum attendants receive a lot of questions regarding snakes. Some of the inquiries are a drift into the mythical realm – and they are so many. Here follows a complication of the most common  myths and misconceptions:

Number One: A Simple Bowl Of Milk Attracts Snakes

In South and North America, there is a serpent called the Milk Snake, or the Lampropeltis Triangulum. When snakes were disappearing into the barns to search for rodents, locals believed that they were going to drink milk from the udders of the cow.

But that is not true. In fact, reptiles cannot break down dairy products. If the myth was true, how then can a cow stand idly while being milked off by a predator? However, snakes are likely to drink milk if they are incredibly thirsty. Otherwise, the only drink they take is water.

When You Cut Off The Head Of A Snake, The Serpent Will Stay Alive Till Dusk

In rural Australia, this myth penetrates the hearts and minds of the locals. The myth is actually based on a fact – sometimes, the body of a snake will engage in some form of writhing after it has been decapitated. However, the story is not close to any truth.

A Mama Snake Will Ingest Her Young Ones If Threatened

There are reptiles and fishes that appear (or appeared) to swallow their young ones, that is, the mouthbrooding fish and the now-extinct frog (of the Rheobatrachus species). While that is the case, any snake that swallows another one will immediately die because of the secreted digestive juices.

If You Kill A Snake’s Boyfriend Or Girlfriend, The Bae Snake Will Come For You

This is a cute and funny one, but it is nowhere close to the truth. Snakes lack any kind of social bond. Also, they neither have the memory nor the intellect to remember someone who assailed it. Bollywood is partially responsible for breathing life into this myth.

Also, how will the bae snake even remember you? Was he or she at the scene of the murder? Anyways, you should have a good night’s sleep – no one will come slithering your way.

While snakes lack eardrums, that does not qualify them as deaf animals. In fact, they have inner ears that pick up both airborne and ground vibrations but in low frequencies. If the sounds are at an overwhelmingly high pitch, snakes are unlikely to pick them out.