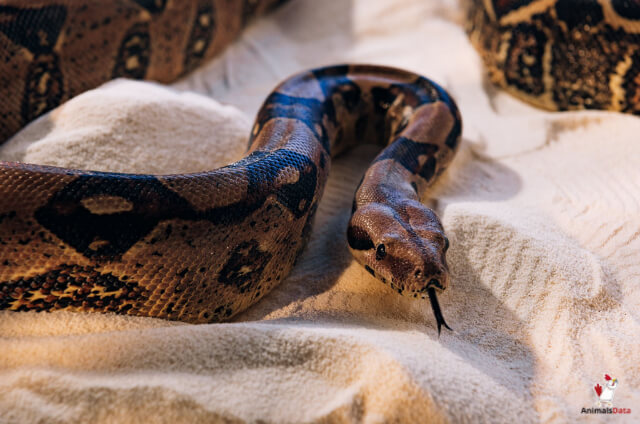 Then again, it is wrong to claim that snakes are deaf, as many people say. You can dismiss that claim by doing this test – find a snake that is chilling around and make a loud noise. You will see that it will move away.

Since we’ve established that snakes aren’t deaf, we should talk about their ear anatomy. Inside the snakes’ heads are vestiges of hearing apparatus. The entire setup is connected to the snake’s jawbones, and so, the serpents detect vibrations impressively. Also, they hear low-frequency sounds very well, and this works as an adaptation to its predator-prey lifestyle.

The hissing sounds made by the slithering giants are probably cautioning signals to creatures that are approaching the snakes. So, it is presumed that snakes don’t sound hisses as methods of inter-snake communication. While snakes lack eardrums, they have inner ear structures that are fully formed.

Wrapping Your Head Around Snake Hearing

In the past, people believed that snakes were unable to hear anything because they lacked (and still lack) external ears. Also, snakes seem unresponsive to noises. These misconceptions, however, are refuted by scientific research. Now, let us look at some information on the anatomy of the snake’s ear.

Many people don’t know that snakes have any hearing apparatus because they want to see earlobes hanging on either side of the snake’s head. If you look directly behind a snake’s eyes, you will see two ears openings – small holes on either side of the snake’s head. They are the same as those of other reptiles. What snakes lack is external ears – also known as pinnae, ear flaps, or auricles.

Below each tiny earhole sits a functional inner ear that lacks the tympanic membrane, or eardrum for short. Also, snakes do not have a middle ear. While many other animals have fluid-filled in their inner ear, snakes have air as their filling.

The Hearing System Of A Snake

By this time, you know that snakes can hear through sound wave vibrations. In this sub-section, you will see how the snake hearing system differs from ours. You may have established that at the moment, snakes lack various hearing structures.

Let’s look at the details of the inner ear in tabulated style:

The two structures – the inner ear and the jawbone – work together to perceive and sense movement emitted through sound waves. As mentioned earlier in the article, snakes pick out low-frequency sounds impressively.

The Somatic Hearing Of Snakes

Again and for the umpteenth time, snakes aren’t deaf. There are many videos on YouTube that will open you up to the auditory systems of snakes.

In the previous section, the table captures a bone found in the snake’s jaw called the quadrate bone. This bone usually moves slightly to respond to any vibrations when the snake slithers on the ground. Research has it that the said bone reacts to both land and airborne vibrations.

Somatic hearing is the picking up of vibrations from the ground and through the snake’s skin. Then, the spinal nerves conduct the vibrations via the bones to the inner ear. Then, the sound signals are then sent to the brain, which infers it as sound.

What Exactly Can Snakes Hear?

The highness or lowness of sound – pitch, not volume, has the Hertz (Hz) as its measurement unit. The quietness or loudness of sound, on the other hand, is measured in the form of dB or decibels. What researchers use to determine whether or not a serpent has hearing abilities is the Hertz unit. Some researchers of herpetoculture have determined that snakes can detect low-frequency vibrations (both airborne and ground) into the inner ear in the region of 50 to 100 Hz. However, there is much that is not known with regards to what a snake exactly hears. Some studies have captured that their sensitivity peak is in the region of between 200 and 300 Hz. Others give the figures of between 80 and 160 Hz.

Let’s make the discussion human. A person who has excellent hearing abilities can take in anything between 20 and 20000 Hz. A pipe organ is described as producing between 20 and 25 Hz, the same region as that of a cat’s purr. The highest note that a grand piano can make goes up to 4100 Hz. If we look at that knowledge, we can deduce that snakes only pick what acoustic experts consider low sounds.

The various studies have included different snake breeds, and thus, it is not easy to form a blanket statement on all snakes and their hearing. An assumption is that all snakes have the same hearing abilities since their ear anatomy is the same. A possibility is that snakes that are part of different environments can hear other sounds ranges.

Since we now know that snake’s hearing sensitivity peaks at between 200 and 300 Hz and humans have theirs at around 250 Hz, we can infer this – a pet snake can hear you talking to them. Many snake owners claim that their pet serpents recognize the names they give them. This claim is fully supported since snakes can hear their owners.

Snakes And Sounds In The Air

There was a study done on the hearing systems of snakes and involved ball pythons. The inference from the study was that snakes could sense vibrations coming through the air. Also, they seemed to pick out lower notes with particular strength as opposed to higher ones. However, this is being investigated against the backdrop of a snake’s survival in the wild.

Scientists also try to investigate if snakes possess special senses, and humans do not understand. The human voice is detectable to snakes since it is in the Hertz range of between 500 and 1000, which also captures the range for snakes.

How Exactly Do Snakes Pick Out The Music Played By A Snake Charmer?

Snake-charming is called so because it gives the impression that the piped music played brings the snake to a state of hypnosis. The instrument played is called a pungi.

Of the many, the snakes used in these ‘charming’ performances are mainly cobras. However, python, vipers, and other snakes’ species also get charmed.

The snakes are either kept in sacks or baskets. This is a protective move that spares humans for the fatality of a venomous bite.

The popular belief is that music is what charms the snakes, which is not valid. The snake – whichever it is – follows the movement of the music item, the pungi. In-depth research suggests that the snake takes the pungi as a threat. So, it behaves alertly and carefully as it would with a predator out in the wild. The bad news in the cultural world is that the snake charming art is slowly dying down. It is most prevalent in India, but things are changing there. Recently adopted laws have made it an illegal thing to own snakes in the country. Thus, snake charmers are finding it hard to continue with their performances.

Can Loud Noise Be Stressful To A Snake?

If the loud noises are repeated, the snake is likely to experience distress. This could escalate into a plethora of health problems if the issue is not addressed adequately. If you are a snake owner and keep it in a noise-frequent environment, you may want to move to a safe place.

Loud noises or music will produce vibrations that will lead to the snake developing constant reactions of its body. In the wild, snakes will sometimes be scared because stomping frequently happens around them. The vibrations formed by the stomping will trigger a shock in the snake and cause it to slither away. Music usually has quick frequencies that will cause the same reaction.

If you listen to your musical bangers using loud sounds, ensure that your pet snake is not around. Also, you can use headphones to prevent your snake from feeling awful about being around loud music. Always monitor your pet snake to pick out any signs of loud-music-related stress. Here are some variables you can look out for:

1. Lethargy – check if your pet snake is becoming more lethargic than its usual form.

2. Check for any changes in their basking or eating habits

3. Look out for any urates (feces) changes.

If you see something unusual, get to the phone and talk to a reptile vet.

Unlike many other animals, serpents do not use sound in their inter-snake communication. But that does not mean that they don’t make sounds – remember that snakes hiss and rattle. However, the hisses and rattles produce frequencies that are too high for them (the snakes) to hear. So, most snakes are unable to use sound to warn other snakes about impending danger.

Other Senses Of The Snake

We’ve looked at the sense of hearing for the longest time in this article. Now, we will pay attention to the other senses, such as touch, smell and taste, and sight.

Snakes have a simple but highly developed sense of touch. Since the body of a snake is elongated and stays on the ground, for the most part, they need to feel everything. There are many tactile receptors in the snake’s body. These are highly sensitive and help to detect and environmental changes.

In snakes, chemosensory perception is highly advanced. Since most snakes have limited hearing and poor eyesight, they are compensated by having a good sense of smell. The tongue of a snake has very few taste buds.

A snake uses its tongue to collect chemicals from the ground or the atmosphere. What the tongue lacks are smell or taste receptors. As you may already know, a snake’s tongue is bifid or is notched into two parts. This is how it works:

1. The tongue moves out of the mouth and picks up (or gathers) scent particles from the atmospheric air.

2. When it is withdrawn, it transfers the scent particles to the Jacobson’s organ, a perception structure.

There is a transparent scale that covers and protects the eyes of a snake known as braille. Most snakes lack a keen sense of sight since they are nocturnal – active at night. The other snakes work around dawn or dusk.

The other interesting detail is the differences between the pupils of snakes. While nocturnal and crepuscular snakes have vertical pupils, diurnal ones have rounded pupils. This variation of pupil structure is caused by the difference in active times of the snakes.

The snakes’ eyes are not able to discriminate color, but they have special equipment of light receptors. They have cones and rods – rods provide low-light, fuzzy vision while cones produce clear images. Snakes can see and perceive objects clearly when they are at a short distance.

Arboreal snakes have a uniqueness – their eyes are well developed, and most of the snakes have stereoscopic vision. Snakes that live in tree habitats will have oversized eyes.

Colour vision is not absent in snakes – a few species can see color. Scientific literature has it that tropical snakes are likely to have more color vision than their relatives in the desert. Their skin reflects this.

Other snake species have infrared vision. This enables them to see details on the body heat of things – even prey. This helps them to detect the size and the location of the body.