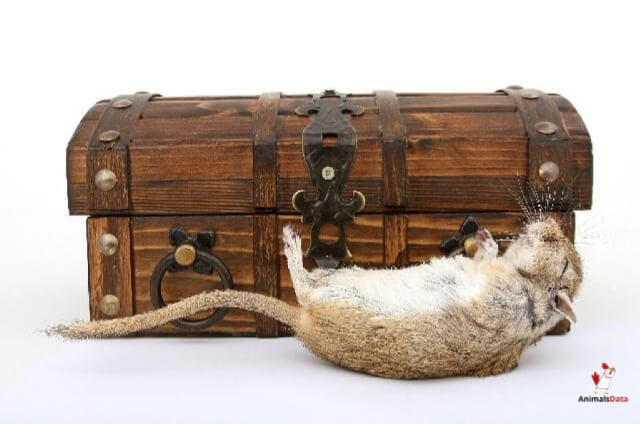 This is possibly true – when a mouse is feeling sick or dying, there is a possibility for it to produces squeaks. If you get to see a mice squeaking in pain, you will know that the sight is heart-breaking. If the mice were your pet, you might have to accept the rodent’s demise and move on.

When a mouse is cornered, trapped, and feels endangered, it is likely to squeak loudly. If you have ever watched a feral cat chasing a wild mouse, you are likely to have heard some squeaking coming from the mice as it is given chase. When it produces the sharp noises, it is usually trying to tell the predator to keep off. More often than not, the tactic rarely works. When you first get your pet mouse, it is likely to squeak whenever you are around it. This is because it feels like you are a threat. During these very initial moments with the mouse, it is best to start with a gentle approach. Introduce yourself to the rodent slowly without invading too much of the mouse’s private space. In this article, the squeak of the mouse will get attention. Also, as an add-on, you will get to know the common noises made by mice and their meanings. Keep scrolling.

Pet Mice And Their Squeaking

A mouse will squeak simply because it is a mouse, and that is what mice do. But more importantly, is that the use of squeaks is a form of communication between mice. If you have a number of them caged up, you may hear them squeaking towards each other or not.

When mice are breeding, they also produce squeaks. Also, it is also the sound effect produced when they are playing around. The point is that it is very common to hear mice squeaking. In some situations, the squeak will be highly pitched such that a human ear cannot pick it. When they are using the squeaks to communicate with each other, you are unlikely to pick it out too. Here is all the info that you need to know about mice and their squeaking:

1. Mice Squeaking Is The Language Of Their World

The only form of communication understood by these tiny rodents is squeaking. The squeaking patterns usually change depending on the concern and emotion involved. Sometimes, the sounds are typically ultrasonic; hence we never pick them out, or if we do, it happens mildly. When you happen to hear the squeak of a mouse, it is usually produced at a different sound level and with a high frequency that our auditory apparatus cannot accommodate.

2. Mice Squeaking Is The Background Music For Breeding

When a buck (a male mouse) is courting a doe (a female mouse), both of them will use squeaks to get each other’s attention. When the male wins her attention, whatever follows is nothing strange – they will engage in breeding. When that is happening, squeaking will happen, implying that the procedure will be very noisy.

When you have male and female mice together in a hutch, the males will squeak to get the special attention of the female around. Breeding happens against the backdrop of the squeaks. Also, it is very common to hear female mice squeaking.

When breeding happens, a gestation period of 21 days follows. When the female mouse delivers the litter, the babies will squeak. So, breeding and birthing are two instances where you can expect mice to squeak.

3. Mice Squeaking Is The ‘Stressful’ Sound

When the rodent critter is stressed, it is likely to start squeaking. Stress in mice can be caused by the following: aggression, lack of food, inter-mouse competition, presence of other mice, and displays of aggression.

It is very easy for mice to get stressed. When that happens, it is usually motivated by external factors that induce the ‘stressful’ sound. When the mice feel that you are the threat, they will not hesitate to squeak at you. If you have a pet mouse that keeps squeaking, study the surroundings to establish the external factors motivating the squeaks. If a barn owl is scratching the window and the mice see it, they are likely to feed scared and thus stressed. Ensure that the stress is minimized completely.

4. Mice Squeaking Is A ‘Playful’ Sound

In some cases, the squeaking is not a cause for alarm. If you have two mice that like each other, they are likely to engage in a lot of play. If they do, you will definitely hear them squeaking because it’s also their pleasure sound. If you pay attention to them, it might appear as if they are fighting, but that is not the case. Playing and enjoying each other’s company is something that comes naturally to them.

However, it doesn’t mean that you should leave them completely unsupervised. The squeaks should motivate you to pay attention to their overall behavior. Once you do, you will pick out the reasons. Any severe or extreme behaviors which can be injurious are entirely unacceptable.

Why Does My Pet Mouse Squeak When I Touch It?

You will discover that your pet mice may start squeaking when you try to handle or touch it. This is because they are terrified at your sight and see you as a potential threat. Anything that intimidates them is likely to be squeaked at. For the first few weeks that you and the mouse will live together, you will probably be woken up by mouse squeaks. When you continue living with the mouse, and it gets used to your presence, you will realize that the squeaking will die down. They need to familiarize themselves with their new environment and you too. As mentioned in the opener, you need to make your presence known to the mouse slowly and gently. So, do not be aggressive at all to the already intimidated mouse.

How Can One Make A Mouse Stop Squeaking?

The first and the wisest move to make in stopping the mouse squeaks is by establishing why it is doing so. Since you are already opened up to the possible reasons for mice squeaking, do your research against those fine points. As you get that done, pay attention to the symptoms exhibited by the mouse and study its environment.

Once you know the underlying problem, it will be easy to fix this issue. With a good reason, the solution is as simple as drawing the window curtains or getting the mouse in a separate cage.

The Noises That Mice Do Make

In this rather long add-on, you will get opened up to the most common noises (or sounds) that mice make, that is, on top of the squeaks. How exactly do mousy mice sound like? If you have been picking out some strange noises in your house or building and wonder if you have mice around, this is your read. The article covers the nitty-gritty details about mice and the sounds they make. Here is a small table to tell you what’s in store:

Raising The Curtains For The Noises

As you may already know, mice are the tiniest in the rodent family, and they have large ears, long tails, fur-covered bodies, and pointed noses. The varieties of mice that are common include the house mouse, the dormouse, and the field mouse.

While many people refer to rats and mice as the same rodent, they are not. Generally speaking, rats are more aggressive and have large sizes. Actually, seeing a rat is likely to intimidate you than if you saw a mouse. Mice and human beings have one thing in common: they are both communal creatures. Mice like to vocalize what they feel, and usually, they talk to each other to find food, shelter, and water. Apart from squeaking (the heart of this article), mice also gnaw and produce very soft scampering. Actually, mice can even break into singing.

As discovered in the previous section, the mice squeaks will change frequency and pitch, depending on whatever they are trying to communicate. When you hear the sound of a mice behind your wall, chills of fear are likely to run down your spine. Here are the everyday noises made by mice, one after the other:

If you have heard things like scurrying noises in your place and are unsure about the cause, it is likely that are mice involved. You will hear mice making scurrying noises before you go to sleep and deep into the night. Occasionally, you are likely to hear the noises during the daytime when the house is quiet.

When mice are making scurries, you hear them as soft and light scuffles. These sounds get produced due to the mice moving around your home. Their bodies and their feet brush up against floors and walls, and then, their claws dig into the surfaces to gain traction. You can get terrified when you hear the noise – your imagination will run wild and tell you that a creature is lurking in the shadows of the night. The sounds will surely intimidate you, but you have nothing to worry about.

This is another sound that is commonly and famously associated with many rodents, including mice. The mouse will produce scratches when it is climbing up your walls and traveling through your house’s insulation. While making the scratches, the pests are usually looking for nesting materials all the time. This is an activity that involves scuffles and scratches.

Although arguable, a fascinating thing about rodents is that they have incisors that grow throughout their lives. For that anatomical reason, they must continuously engage in gnawing and chewing so that they shred their teeth into proper sizes. This is true and accurate for mice too.

If mice have invaded your place, you might be hearing sounds that very similar to chewing or gnawing from your attic or behind your walls. A mouse can chew through wood, plastic, soft vinyl, rubber, and even fiberglass screening and aluminum. They also nibble on concrete too, provide it is not cured fully.

That said, materials like steel wool are a no-no for mice, but not because they cannot eat through it. They choose to leave steel wool alone since the item has sharp edges that hurt their pointed noses. However, and unfortunately, they usually grab the wool with their feet and steadily pull it out of its seal.

You should note that the chewing behavior of mice causes many reported house fires. Mousy mice take their time and gnaw through electrical insulation causing short circuits to happen. So, this should be the mice sound that you fear the most.

Of all the mice sounds captured in this article, this is the one that is most challenging to pick out. If you have a pet mouse, try and get really close to it. Then, stay quiet and still. Then, you may hear the mouse engaging itself in some cleanliness affair – the sounds produced are soft, brushing ones. While we think that mice are pests and therefore inherently dirty, they love staying clean.

Can I Hear The Squeaking Of A Mouse? (A Reiteration)

Yes, yes, you can. Whether the mouse is a wild one or your beloved pet, you will hear the squeaks. However, and more often than not, the squeaks will be inaudible. As mentioned elsewhere in the article, rodents usually produce ultrasonic sounds to defend their territories and attract their mates. These vocalizations have frequencies ranging from between 30 and 110 KHz, a bracket far beyond the human ear’s capability.

Where Do Mice Make Their Noises?

The noises usually come from the following places: attics, walls, floor, ceilings, and behind kitchen cupboards. These sounds will mostly come out at night since the rodents are nocturnal and because darkness usually protects them from predators.