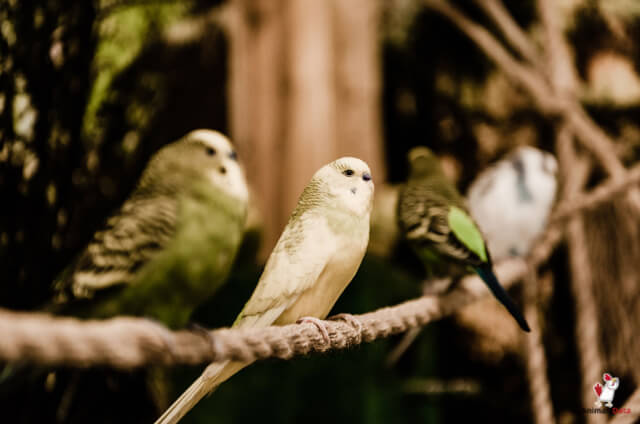 Well, if the bird is insectivorous, expect it to feed on spiders. These kinds of insectivorous birds include sparrows, wrens, crows, blackbirds, and bluebirds. Also, the blue tit, which is the European cousin to the chickadee, makes that list. The blue tit feeds its chicks with many spiders before the hatchlings are ready to leave their nest.

An ornithologist, Kathryn Arnold of the University of Glasgow, notes the following – the blue tit overlooks other insects and chooses spiders since they have a large amount of the element called taurine. If you don’t know, well, taurine is one of the many amino acids that have the following developmental effects:

1. It leads to less anxiety

3. It leads to better eyesight

By feeding their hatchlings with spiders, blue tit parents ensure that their progeny grows up to become intelligent and brave.

Well, to make your garden and yard more pleasant and welcoming to birds is a good thing, especially if you have pest control in mind.

Many of the backyard birds have a diversified diet – they combine berries, seeds, and of interest, insects. When spring is ending, and summer is starting, birds are usually busy with feeding their hatchlings. Baby birds enjoy bugs more than anything else.

If you are a gardener, that should be good news. During the same period (late spring, early summer), garden pests are usually peaking. Instead of going for harsh pest control methods, why don’t we invite birds to deal with the buggy business? Our bird friends will save us the hassle of garden combing to find whiteflies, earwigs, aphids, grasshoppers, grubs, cucumber beetles, and even spiders (they’re bugs, aren’t they?)

Before we go on any further, it is vital to go through some helpful tips. The ideas will open you up to the methods of making your garden or yard bird-friendly.

If you are preparing a bird-attracting landscape, it is essential to give places where the birds can cover or hide, especially from harsh weather. During the spring-summer seasons, birds will need sites to do their nesting business. The nesting options that appeal to birds are small trees and twiggy shrubs. So, if your landscape is always tidy, neat, and well-coiffed, you should consider letting one area develop naturally. So, if the site is impressive, many birds will want to nest there. The more the nests, the more the hungry mouths there are. Thus, the bird parents will keep doting and dealing with the bug situation.

If there’s one thing that birds are attracted to, it is water – both for bathing and drinking. The situation becomes better if the water is in motion. If you have something like a birdbath, consider injecting a bubbler into it. If you don’t have a bath, try and get an outdoor fountain. Apart from improving your place’s aesthetic situation, the items will create an idea of moving water that will appeal to the birds.

Food-ing The Area (Get It?)

The many people who feed birds usually put away their feeders when the warm weather sets in. However, birds who enjoy their time dotting on insects will not mind the occasional snack. Leave around one or two feeders outside and ensure that they are full of quality seed. This will help appeal to the following birds: cardinals, sparrows, chickadees, and grosbeaks. It would also help if you considered suet cake (the non-melting kind) that will keep woodpeckers coming into your yard. When they are in confinement, they will comb around and munch on the insect larvae and other available delicacies.

A Tabulated List Of Birds And The Bugs They Eat

The following is a list of some common backyard birds and the insects they eat. If you are a bird lover, you will like the sight of any bird capture on the table. Also, the table sets aside a column to note whether the listed birds eat spiders or not. The winged creatures will take care of the pests around, leaving your garden good looking and full of life.

Unlike popular thought, pest control activities are not necessarily conducted by people. Also, they do not always include chemicals. Nature itself has its control systems. For example, the critters that will be mentioned hereafter are spider predators. For the many people who have arachnophobia or the fear of spiders, that is good news. Actually, this fear is considered to be in the top 10 list of phobias worldwide.

As with all or most phobias, telling the sufferers that nearly all spiders pose no harm will not do much good. Even telling them that many spiders are prey and not predators won’t change things. The point is this – it is difficult to change the way people feel about arachnids in general.

Anyway, that is all beside the point of this section. Here are some of the top predators for snakes:

In Southern U. S., geckos, chameleons, and lizards are very common reptiles. They immensely feed on other small insects, but spiders form a large part of their diet. Scientists at the University of California demonstrated how lizards could get voracious, especially when it comes to spiders. If spiders and lizards are both in controlled environments, lizards can easily usurp power and eradicated all the spiders present. The scientist did their research in the Bahama Islands. There, they introduced lizards to control and contain orb spiders (non-native but invasive species). Within five years of the investigation, all the orb spiders were out – wholly eradicated. On the flip side, lizards were alive and present.

2. Fish, That Is, Archers, Mosquito Fishes, And Archers

The three mentioned fish types have an excellent appetite for spiders. And yes – the spiders need to go in or around the water body so that the fish get them. There are several spider species like the water spider that get eaten by the fish.

While many people think that this animal is a bird, well, it’s not! It is a wasp. The tarantula hawk chooses not to hunt tarantulas while they are in their burrows. However, the wasp attempts a ‘knock’ on the spider’s web, which is a baiting move. When the spider appears, the hawk stings and paralyzes it. Then, the hawk drags the spider to its burrow. The dead tarantula is then served to the young hawks.

The tarantula hawk (or wasp) belongs to the larger insect family known as the spider wasps. Female spider wasps sting spiders to paralyze them and later feed them to their young. The individual differences come about with how the victim spider is taken to the nest. While some drag the spider, others pull it across the water, others carry it, and others take off (fly) with it. Regardless of the transportation method of choice, the result is one – there will be fewer spiders to worry about.

Some monkey species enjoy a spider’s bite during mealtime. However, it would not be practical to convert your garden or backyard into a monkey zoo. Apart from getting in trouble with the state authorities, it will be a counterproductive move to make.

Popular belief has it that centipedes are more repulsive than spiders. That aside, the arthropods are actual useful control insects that can deal with spiders. Since centipedes have carnivorous inclinations, they will claw the spiders and paralyze them.

Unlike popular belief, snakes do not attach humans – except when they feel threatened and need to defend themselves. They can poison and kill spiders.

This is a common phenomenon in the wilderness – where some animals feed on their kinds. So, some spider prey and eat on other spiders. This is very beneficial to humans because this eliminates arachnids that would pose a significant risk to them.

The Antidote To Fear Is – Information!

It has been said before, time and again that phobias are irrational. People only fear something because it exists, but they lack a reasonable explanation.

If you have a big phobia for spiders and want to attend to it, you should consider spending time doing your research. You should identify the spiders that are threateningly dangerous. Then, you can work on welcoming or tolerating the spiders that have a utility value. In the United States, here are some of the spiders whose bites are not problematic:

The southern, western, and northern varieties of the black widow are the well-known ones. The species consists of very poisonous spiders. Apart from the known types, be aware of the red widow and the brown widow. The common thing about widow spiders is that they are either shiny black or dark brown with reddish hour-glass looking-like markings. Actually, it is only the female widows whose bite is dangerous.

While it may be among the most poisonous spiders in North America, the danger of the black widow is mostly overrated. Each year, only 12 bites of the widow spider are classified as dangerous. Also, it is over 100 years since any person died from a bite of the widow spider. Many of the bites are classified as ‘dry’ since no venom is usually injected. When a spider feels threatened, they are either likely to flee or to play dead. Most snake bites that happen are merely accidental, such as when the widow is pinched between clothing and skin.

These spiders rank second on the United States’ most venomous spider list. The particular species that most people know about is the brown recluse. The recluse spiders are of at least 12 types, and some species are spread across North America. To identify a recluse spider, you will need to check for a marking on its back that is violin-like in shape. Recluse spiders prefer warmer climates, and you will find them from Colorado (in the West) to Georgia (in the East, southern Midwest). As its name clearly suggests, this type of spider is shy and cohabitates with humans in their dwellings with minimal problems.

The spider feeds on tiny prey and scavenges more than it hunts. When a bite occurs, it is usually accidentally. Deaths from the bite of a recluse spider are almost unknown.

This spider goes with other names such as the funnel-web spider or the aggressive house spider. Most experts generally consider the hobo spider as being non-toxic. The only time the hobo spider lives up to its aggression is when its eggs sacs get threatened. Except in that motherly situation, the spider seldom bites. The report on the hobo spider’s bite’s toxicity is attributed to bacterial infections – these can occur when the bitten area is left unattended.

Like the other three, the yellow sac is a non-venomous spider. However, its bite may cause an open sore to develop. If left unattended, the sore can get infected. The spider is small and has a pale color, together with a yellowish-beige abdomen.

Of the many spider species, it is only a small handful of them that offer any danger. Even with the others that are considered toxic, there is often a lot of exaggeration. Before you decide to smash a spider or call in help from birds, learn a bit about the critter. This way, you will know if it has any benefits to offer while living in your house, yard, or garden.