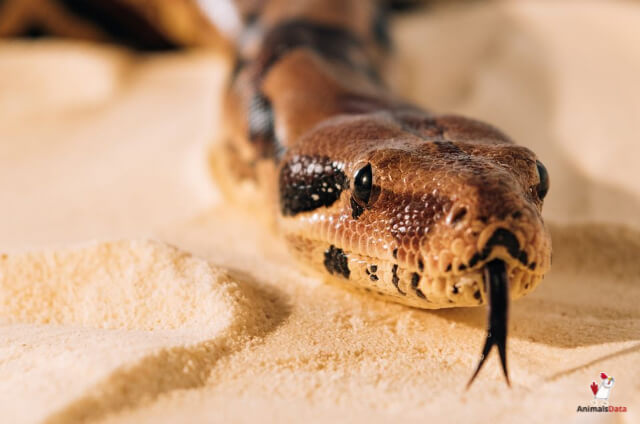 While a bull snake is often depicted as a kind, timid, and harmless serpent, the rattlesnake is a vicious and aggressive viper. That is a half-truth – both snakes can cause harm but they usually execute their deathly missions in different styles.

Another face-value difference is that the bull snake has rounded pupils that sit on a relatively narrow head. Also, they lack rattles as in the tail of the rattlesnake. Also, the pits that you see above a rattlesnake’s nostrils lack the anatomy of the bull snake. In many other respects, these snakes are different. From this point onwards, the differences between these two snakes will be extensively explored.

In this part, you will get a table summarizing the differences between the two snakes – rattlesnakes and bull snakes. The differences will be listed and expounded against variables such as diet, digestion, hunting behavior, and reproduction, among others.

Is It A Gopher Snake Or A Bull Snake?

Together with the pine snake and bull snake, the gopher snakes are different names that belong to the same snake species. The genus of the particular species is Pituophis catenifer or Pituophis melanoleucus. In the western part of the United States, you will find the locals calling the snake species the gopher snake. On the eastern side, the common reference is the bull snake. Whichever the name, the snake is a nonvenomous serpent that helps control rodents’ population in many areas. In states like South Dakota, farmers find the gopher/bull snake very helpful since it prevents crops from being destroyed by mammals such as gophers.

Mostly, the body of a gopher or bull snake is tan or yellow. If you look at the top of its body, you will see that it is covered by spots colored reddish or brownish. The spots will be triangular, and you will see marks that look like blotches on the snake’s back. With this description, one may think that the gopher snake is a venomous rattlesnake. The difference comes in when you look at the entire snake. The bull snake has a limber body that is quite long, while a rattlesnake has more bulk and is thus stockier. If you look at the rattlesnake’s underside, you will see a yellow color populated by large black spots. The sports will seem like they are reaching out toward the sides.

In America, the bull snake is among the largest snakes. Traditionally, it can reach up to 6 feet long. However, a website reports that there are reports of bull snakes that have grown to over 8 feet long. The skin of the bull snake is covered in keels. This makes the serpent rigid – more rigid than any snake that has smooth skin. The female gopher snake is generally smaller than its male counterpart.

You will find the gopher snake in Central Mexico and up to the Western North America coast. According to Stanford University, the snakes habituates in British Columbia. In areas where small animals and rodents live, gopher snakes live and adapt very quickly. This is because there is abundant food. You will find the bull snakes in the following places:

Burrowing and living under the earth’s surface is what the snakes prefer. You are likely to find snake collectors keeping bull snakes as their exotic pets.

Although the gopher (or bull) snake is built powerfully, it is a docile serpent. When the snake gets threatened, you will hear it making snorting sounds the same as a bull’s – thus its name. Like other reptiles and snakes, the bull is cold-blooded, and it gets warmth from the environment. During the winter months, the bull snake goes into hibernation. During the warm season, the serpent seeks warm rocks and logs.

Snaky Specifics 101: About The Bull Snake

As mentioned elsewhere in this article, bull snakes are large reptiles considered part of the gopher snake subspecies. Their height is intimidating, but they can cause human beings no harm as they are not venomous.

Instead of using venom, the bull snakes used the prey elimination-style called constriction. This way, it takes down small mammals with little difficulty. Constriction is fatal even for humans (imagine the anaconda). But bull snakes do not grow long enough to be a threat to humans.

These snakes have a bad attitude – that is what they are well known for. If you confront a bull snake, they will act with agitation. You will hear them puffing and hissing, and this will happen if they can’t find somewhere to escape. When people see this kind of reaction, they may persecute the reptile, however harmless it is.

Welcome Them Into Your Property

Sure, you don’t want a bull snake in your horse. But that shouldn’t stop you from welcoming them. Remember that they feed on rats and mice. I can bet that you’d rather have a harmless snake slithering around than little rodents running around and destroy things.

Also, bull snakes can prey on other snakes. So, allowing a bull snake to mark your property as their territory will keep venomous snakes away.

It is important to note that the reach of snakes gets underestimated. Many people get bitten every year while they try to kill a snake. Remember, the first response of a cornered snake is to retreat safely. A snake isn’t always out to bite because, by charging forward, it is putting its own life on the line.

Most of the bull snake species will be found in areas of high rainfall and humidity. As mentioned elsewhere, these snakes live in burrows. They can either big their holes or take over a burrow that was dug by a rodent.

Many humans who come across bull snakes mistake them for the rattlesnake. Since many people know that rattlesnakes are venomous, they will try to kill the bull snake, which is a fatal mistaken identity case. When habitats are destroyed, the bull snake is likely to suffer.

The breeding of these bull snakes happens in captivity. But no – they haven’t been domesticated at all.

What About Petting The Bull Snake?

While it is possible to pet this snake species, the idea is not to be sold to beginners. They have a rowdy temperament and require frequent and proper handling so that they get tame. Compared to other snake species, you are more likely to be bitten by a bull snake.

Snaky Specifics 101: About The Rattlesnake

From head to tail, the rattling rattlesnake commands all the respect. When the rattlesnake gets threatened, this serpent coils defensively, rears its head, and vibrates its tail. Their rattles have particular segments on their rattles, which is their signature mark.

Apart from their powerful bites, rattlesnakes have a lot going for them, and we’re about to find out.

1.There Is A Link Between Musical Instruments And The Scientific Names Of Rattlesnakes

All rattlesnakes belong to two genera that fall in the Crotalinae subfamily, that is, the pit vipers. The genera are:

a) ‘Crotalus,’ which comes from the Greek word meaning castanet

b) Sistrurus, which is an invocation of an ancient musical instrument

The genus names are, without a doubt, a reference for the snakes’ rattling.

2. There Is Variability In The Venoms Of Rattlesnake Bites

With each rattlesnake bite type, there comes an intricate cocktail that has loads of different toxins, compounds, and enzymes. Here are some of the components explained:

a) Hemotoxins – these compounds work by disintegrating capillary walls and stopping the process of blood circulation. Hemotoxins are critical ingredients in most of the venoms.

b) Neurotoxins – these attack the central nervous system of a victim, thereby causing paralysis and seizures.

The point here is this – you will find some timber rattlesnakes that live in the American South having more neurotoxic venom than those in the north.

3. The Rattlesnake Takes Its Bite With A Pair Of Movable Fangs

Mambas, cobras, and other snakes use a pair of fixed fangs to inject their venom. The snakes will have to bite their victim down and hang in there to deliver a punch of venom. However, the case is quite different when it comes to rattlesnakes.

The fangs of rattlesnakes do swing forward to allow a quick strike and an even speedier venom injection. When the rattlesnake is not using its fangs, it pulls them back and pressed them against the roof of its mouth.

4. Rattlesnakes Bite Are Not As Fatal As You May Think

In North America, the leading purveyors of poisonous snakebites are rattlesnakes – at least 7000 people are bitten every year. Since antivenins are available, only 5 to 6 of the snake’s bites can lead to a fatality.

5. The Head Of A Disembodied Rattlesnake Can Bite

I know – this is hard to believe, but it has happened before. In 2018, a Texan man decapitated a snake with a shovel. But he was only to be surprised with a bite on the hand from the rattlesnake’s head. Luckily, the man lived.

This means that even death cannot stop the rattlesnake from inflicting one final blow.

6. There Is No Relation Between The Snake’s Age And The Segments In Its Rattle

This is a myth that is easy to believe – that every rattle segment corresponds to one year of living. In reality, a rattlesnake engages in shedding many times. So, it can gain many rattle segments in a single year. Also, segments are subject to getting worn out.

7. Again, There Is No Egg-Laying Business When It Comes To Rattlesnakes

Rattles are the types of snakes called ovoviviparous; they produce their eggs in their bodies. Then, these eggs hatch inside, and when the time comes, the rattlesnakes give birth to live young ones who are fully formed.