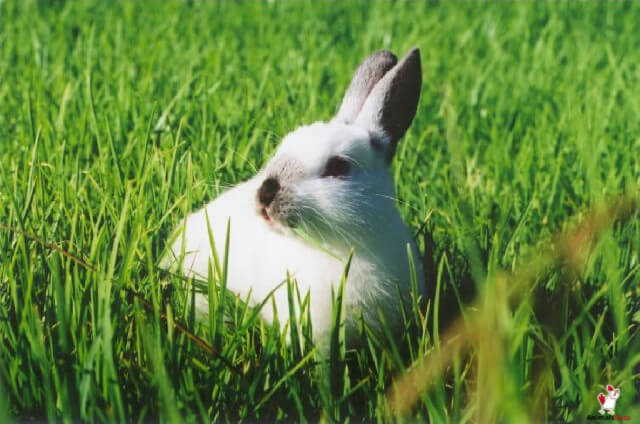 Well, yes – rabbits are territorial, and they can get very expressive about it. If you learn about rabbit socialization, you will pick out that rabbits organize themselves in hierarchies. For every colony (or group) of rabbits, there will be one on top of the others. And at all times, the ‘alpha’ rabbit will always try to assert its position through actions like humping and biting.

Now, let’s see how rabbit territoriality can take shape? Can it bring aggression out of rabbits? I mean, how bad can it be? Well, keep reading to find out.

Naturally, rabbits are unaggressive. This is because they are prey animals and most prey are usually calm. They choose flight over fight and will always take their chances by escaping a tense situation.

However, rabbits can shift from their cute-bunny personas to going full-blown berserks. If you didn’t know, rabbits could use both their claws and teeth to inflict damage. So, be careful when you mess around with a rabbit; you could end up in the hospital nursing a terrible wound.

My Rabbits Keep Biting One Another, Why So?

Don’t take it that the rabbits are nibbling each other because of aggression. Again, it could be a sign that the two are fighting to be top of the territory. If that is the reason behind the bites, the only thing you can do is separate them. If you leave them fighting, they will hurt each other.

Out there in the wild, colonies of rabbits live in warrens. There will be a rabbit leader for every warren – one who has other rabbits under its command. When mealtime comes, the rabbit leader eats first before the others. And what about grooming? All the rabbits subordinate to the alpha will take turns grooming their warren leader. The top position is such a sweet spot, isn’t it? So, it is reasonable that one of your rabbits wants to be on top.

Another reason for biting each other could be frustration. If you keep two rabbits caged up without letting them free, their agitation is likely to grow. The rage mixes with the unexpended energy and makes the rabbits act up. In the end, we have rabbits that can’t stop fighting.

My Rabbit Is A Little Too Territorial – How Do I Prevent It from Fighting With Others?

Well, the best move, theoretically speaking, is to leave the rabbit in a cage for the rest of its life. But that is not practical, seeing that a rabbit may get agitated if it is not left free to exercise. But maybe you can consider separating the territorial, aggressive rabbit alone for some time.

But let it not be closed in for too long. Rabbits can get depressed, stressed, and lonely whenever they are left alone. They either need attention from others of their species or yours as their owner.

Since you can’t be with the rabbit all the time, let it learn to coexist with the others. You can contribute to the peace by distracting the rabbit with treats whenever it starts fighting the others. It will soon realize that the behavior is undesirable, and hopefully, things will be better.

Stopping Rabbits From Being Territorial And Fighting

This section gives you a list of things to focus on as you stop your rabbit from expressing excess territoriality:

1. Wait Until They Have Bonded

To better the situation among the rabbits, they need to see each other as friends and not foes. When you have all the bunnies connected, it will be difficult for them to start fighting. Once they are bonded, you won’t be able to separate them.

But how do you do it? First, start by putting them in separate enclosures. This helps them to connect using scents. After some time, introduce them to each other in a neutral area – somewhere that neither of them will claim to be the alpha. If the rabbits ignore each other and hop around, that’s better than fighting.

Things should go well if the rabbits start grooming each other, cuddle together, and share toys. You should count it as a win if the bunnies try to sleep next to each other even when separated by a wire mesh (cage against cage).

If you see any form of agitation brewing, take them away from each other. You should look for signs such as growling, mounting, chasing each other, and fighting.

Territorial and aggressive behavior may be attributed to reproductive hormones. Once you neuter or spay a rabbit, its personality will change immensely. To put this to perspective, an intact female will reject any form of companionship by aggressive means. And the unneutered males will fight, hump, and scratch with enthusiasm and energy.

The surgical procedures of calming down the rabbit nerves will help mitigate the fights to a significant degree. A fixed rabbit will have low levels of hormones, meaning that it won’t experience spontaneous aggression.

Aside from the fixing, it is recommended that you keep two rabbits of different sexes. When you have two males or two females, there will always be a constant struggle. And whichever sexes you choose, ensure that they are both fixed.

3. Get A Hutch Large-Enough For Both Rabbits

If you choose to separate the two territorial bunnies, you should get sizeable hutches – hutches that won’t be crammed. If the rabbit feels like its space is a little too tight, it becomes mischievous.

Give room for your rabbit to explore – to jump and hop and feel alive. Have a cage of not less than 12 feet squared. And more – you also need to provide an exercise of about 32 feet squared—the more room, the better the bunny’s experience.

Each day, the rabbit should have about 5 hours of pure exercise within the cage. If left open, the rabbit will likely hop away and into the wild, where it won’t survive that much.

Just like any other pet, your bunny will need to visit regularly. Each year, ensure that your rabbit sees the vet at least once. At the clinic, the vet will take note of your rabbit’s general health. If you bring in an aggressive bunny, the vet may diagnose it with some disease. Remember that too much aggression can be tied to a pet illness.

Get a rabbit-savvy vet, not a general one. A vet who knows everything in and around rabbits should do an excellent job, albeit charging you a considerably large amount of money. To take care of those costs, I advise that you get an insurance policy to cover rabbit health issues. Since fees can rack up quickly, it is good to be prepared.

Well, there it is – rabbits can get overly territorial. However, you can control their behavior by making the moves I have prescribed for you in the read. If you let your territorial rabbits engage in any form of aggression, you could end up with a maimed bunny, and that is not something you want.

For other rabbit-related articles, check these:

3. Weeping Eyes In Rabbits (What To Do)